I will take you down, Burnout Monster. And your friend Existential Crisis Beast—he's going down too. You're both awful.

It happens to everyone, supposedly. You're being productive. You're working hard. You feel like you're moving forward, but it feels laborious, like you're going upstream. And then, suddenly (or not so suddenly), you run out of steam, hit a wall, fall on your ass. Burnout. Existential crisis. General exhaustion. 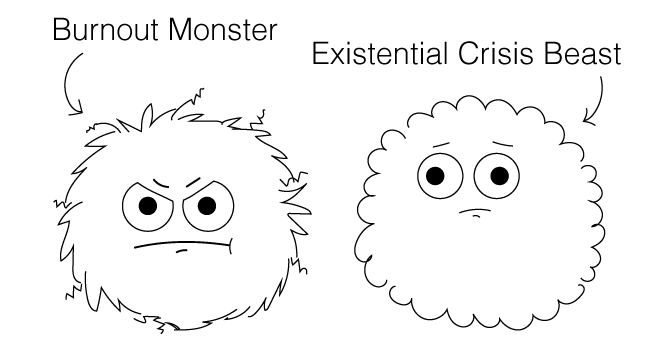 I wish I could write a guide for dealing with burnout with tips and tricks, but I am no authority on the subject, and I have no confidence that what works for me will work for anyone else, so I'm not going to do that. Instead, I'm documenting the things I'm trying, and next month I'll let you know how they're all panning out.

This may seem obvious, but it's hard for me. I keep to myself for the most part because I have a crippling fear of annoying people. I started small: I tweeted about burnout and asked for tips. Got some pretty good ones too.

Okay peeps, I need some help with burnout. Have you dealt with burnout before? What helped you?

@beatricebiology Walking away and doing something else entirely.

@beatricebiology I've had it before. I found that being alone and doing something I enjoy helped me to recharge.

@beatricebiology extended vacation some place that relaxes you. Then when you come back, re-prioritize your "obligations."

Getting off social media and really the whole internet.

Is this in direct contradiction to what I just said? Perhaps. But seriously, social media is a tool, not a drug. I need to use it and then get the hell away from it. Again, this may not be what others need, but it sure as hell is what I need. When I'm scrolling through twitter and tumblr and blah bleh blah it takes up space in my mind. It starts revving me up, and it becomes hard to look away. I feel like Johnny 5 when he's blowing through every book and keeps saying, "Need more input."

It gets to a point where I'm trying to escape the void of my own mind—looking for anything to distract myself from actually having to think.

So, yeah. I need to get off the internet when I can.

Going on a walk. Making some food. Organizing a messy drawer.

What am I going to do with all my free time now that I'm not on the internet looking up pictures of Johnny 5? So many things! Walking is probably the best of them all. I get great ideas and amazing clarity when I'm out walking. Plus, I have a dog that loves walks as well:

She saw a squirrel run up a tree and was really happy about it. pic.twitter.com/XZatxmhV9S

Other rote tasks that get my hands moving and my brain cleared are cooking, cleaning, and organizing. Like the great Gretchen Rubin has pointed out: outer order leads to inner calm.

Having a "board meeting."

Rather than just flail around on my lonesome, I'm inviting five friends over to flail around with me. The people I invited have great ideas and I value their opinions greatly, plus they know me well enough to be familiar with my work, strengths, weaknesses, and goals.

I'm borrowing the idea from Discover True North, which has a section on appointing your Life Board of Directors, people you know or don't know (like your personal heroes), that you can think of and look to for guidance.

I'm having these people over for a solid brainstorming session. I'll have an agenda, lots of brain food, and even some gift bags with Beatrice the Biologist swag. This is going to be legit. When I do next month's follow-up post, I'll let you know how it went.

I used to swear by paper planners. I loved making to do lists and crossing things off. I recorded not just due dates and appointments, but also fun stuff with friends: I'd doodle festivals, movies, and dinner dates in there and write things like "yay" and "so fun" next to them.

Now that I live in smartphone/Google calendar world, I don't do that as much, so I got myself a Passion Planner. And since I have all my work and appointment calendars in the cloud, this planner is just for my own brain scheduling. I'm using it to journal, set small goals, and doodle about things that I do. It's oddly satisfying to doodle about the wonderful dinner I just had or the art festival I'm going to this weekend. It also gives me a physical reminder to set aside time and think about what I want and need.

I live in Los Angeles, and I'm surrounded by museums of all sorts. I should go to them. I haven't been to some of them in years. Because I think they'll always be there, they never make it to the top of my to do list, but I think visiting them would restore some of my energy, so I'll go visit the Natural History Museum, California Science Center, the La Brea Tar Pit Page Museum, and the very surreal Museum of Jurassic Technology, to start.

Looking back at my body of work.

It's really easy to discount all the stuff I've already done when I'm in a rut like this, so I've been going back through old comics, rereading blog posts, and flipping through my book What's in Your Genes? to try to remind myself that I have a lot to be proud of. Some of it is actually pretty good, which is something I don't often say to myself because I'm pretty timid about talking about what I do. 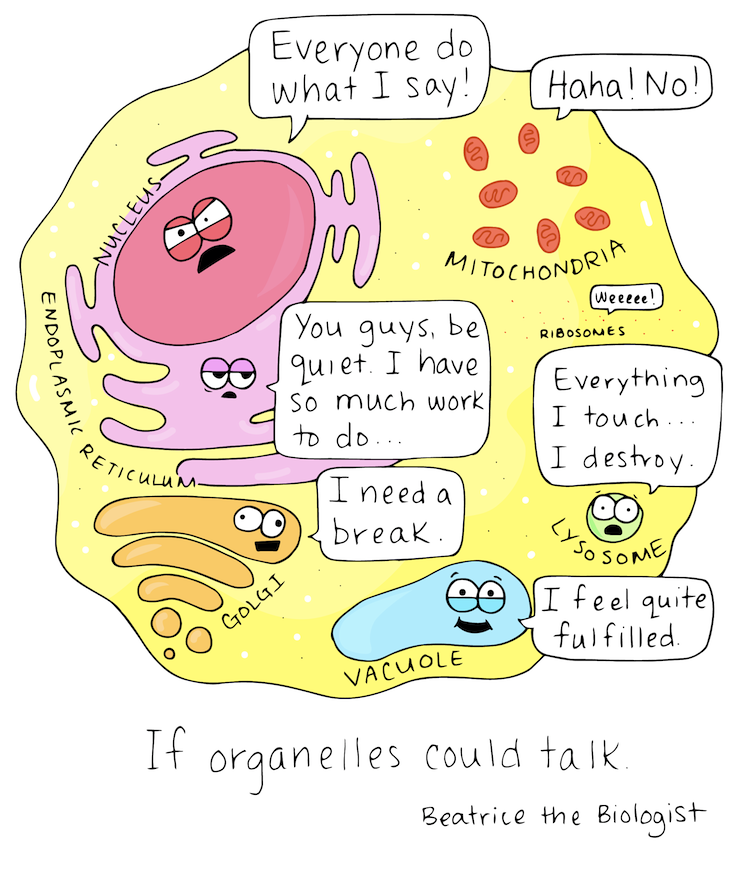 This is an idea from my sister-in-law. When I was planning a book party when What's in Your Genes? was published, I started having a total breakdown because I was so uncomfortable with the idea of having a party to celebrate myself. It felt embarrassing, self-indulgent, and obnoxious. I hated the idea.

My sister-in-law told me that Beyoncé adopts an onstage alter ego, Sasha Fierce, to separate herself from the grandiosity necessary when performing. She suggested I think of my Beatrice self that way: it's not Katie having a self-congratulatory party to celebrate her book, it's Beatrice. Beatrice is confident and can talk about her accomplishments. Beatrice can pull that off.

I'm still trying to do this. It's an ongoing struggle. Hell, even when I post to social media from my Beatrice the Biologist accounts (to people who chose of their own free will to follow me), I feel like I might annoy people. That's insane! I need to embrace my Beatrice self and self-promote without being so uncomfortable.

Being nice to myself.

Again, this may sound obvious, but I'm terrible at this. I am my own punching bag. But I am trying really hard to value myself and be gentle with myself. I'm going to bed early, I'm eating good food, and I'm telling my negative thoughts to take a hike (most of the time…).

Have you ever danced with the Burnout Monster or Existential Crisis Beast? How did it go? Have any tips? Or, if you're currently partying with these two, what are you doing to help yourself?

I'll be back next month with an update. Wish me luck!

The Future Arrives in Daubs of Paint