Save 30% on all subscriptions

After traveling through the remains of an ancient lake and the carvings of a powerful river, we've left the highway and driven up a dirt road, dust billowing around the car. We've been going up, but we're still very much within the Verde Valley. The limestone bones of the hills show dirty white through their covering of stubby trees and tough bushes.

When we step from the car, the heat instantly makes a distant memory of the air conditioning. The dry air has a slightly chalky feel, and everything smells like sun-baked dust. People have talked about the Arizona sun, and with good reason: it's relentless, rebounding from any pale surface it can find and baking any dark ones. Shade is thin and hard to come by. Water just doesn't seem possible here. This place is called Montezuma Well, but Arizonans have a cruel habit of naming waterless washes creeks, so you don't believe the signs.

You can imagine that the first humans in this valley weren't expecting much in the way of water, either. There are a few permanent watercourses, but most of them aren't up on hills. I doubt anyone came up here expecting to find an oasis. It's more likely they were hunting, or looking for a good, defensible location to build homes. Imagine their surprise when they reached the top of the hill, and found an enormous round hole nearly 400 feet in diameter, filled with gorgeous blue-green water.

Montezuma Well. This serene pond occupies a sinkhole in the Central Arizona desert, and is host to numerous Sinagua ruins, lots of happy trees, and several species unique to the Well. Public domain image by Wil Munny.

I can imagine they fairly screamed for joy. In the desert, finding this much water just placidly hanging out in one place is better than striking oil or finding the mother lode.

So why is it here?

Back in the days of Lake Verde, springs beneath the lake brought up abundant calcium carbonate, and deposited it as their waters hit the lake water. They ended up building a huge travertine mound, which persisted long after the lake drained and the rivers began carving up the valley floor.

Now, the main water table is far below this mound, but a layer of impermeable mudstone deposited during a dry period in the lake's long history underlies Montezuma Well, forming a perched water table. At some point in its past, groundwater dissolved a cave in the mound. That cave's roof eventually collapsed, forming the sinkhole we see today. A block of travertine fallen from the cliff. You can see that the gray color is just a varnish: the travertine is actually a very pale tan. This is why fresh surfaces are so important to geologists! Photo by Dana Hunter.

Fractures in the bedrock tap into the perched water table, forming two vigorous springs. And so we have this lovely pond. Just stand here for a moment and appreciate the fact that we are looking at 15 million gallons of water just hanging out in the middle of a freaking desert.

The Hohokam and the Sinagua certainly appreciated it. Look around the rim, and you'll see little stone houses and storerooms built into the overhang of the cliffs. Sinagua ruins in the cliffs at Montezuma Well. Photo by Dana Hunter.

Around 900 years ago, the Sinagua moved down from northern Arizona, and around two hundred of them settled here, building southeast-facing cliff homes with the masonry techniques they'd picked up from the Anasazi. They learned how to dig irrigation canals from their Hohokam neighbors. And they thrived here for around three hundred years, farming the rich alluvial soils of Wet Beaver Creek, which flows by just outside the Well. They were intrepid Americans, with vast trading networks moving goods from the Hopi to the north and indigenous Mexican cultures far to the south. Geology had provided them with all the resources they needed to be enormously successful. And at the end of their busy work days, geology also provided them a wonderful pool to go swimming in.

Let's go have a closer look.

The pond may look somewhat shallow, as it's only covering the bottom of the sinkhole, but it's actually quite deep. There's a false bottom at 55 feet, formed from suspended, fluidized sand. The actual solid bottom varies: at the west spring, it's 124 feet down, while at the east it's only 74 feet below the pond's surface. The water is typically between 70-80° F, which makes for an ideal swimming temperature in this hot climate.

Down at the bottom, tall, leafy trees shade the path along the shore of the pond. The Sinagua built another house here in a shallow cave. 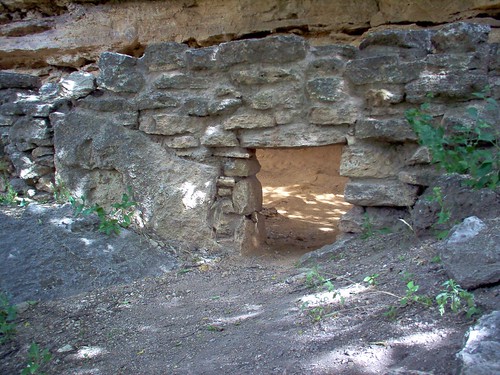 This prime site beside the swallet has abundant shade, a lovely view of the pond, and a panoramic view of the houses up the cliff. Marvelous, darling! Photo by Dana Hunter.

It wasn't just the cave that made this an ideal spot for a home. This is where the pond water vanished into a swallet, an outlet in the thick travertine walls. This is why, despite the springs bringing up 1.5 million gallons of water daily, the pond doesn't fill the entire sinkhole. You can watch the water bubbling and chuckling as it disappears down this short channel into the swallet. It's fascinating to watch. 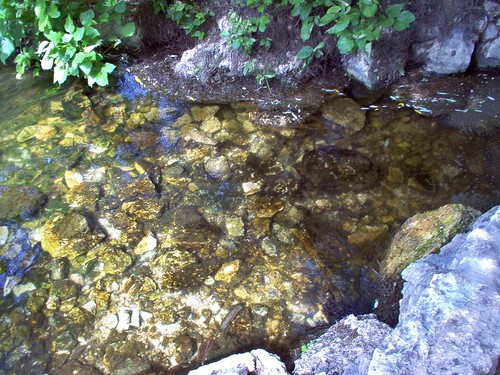 The tiny creek that runs from the pond to the swallet. Photo by Dana Hunter.

Cracks and crannies like this are abundant in the Verde Formation limestones, allowing groundwater to travel quite efficiently. We, on the other hand, will have to trudge back up the way we came. But we're about to see the most magical place in central Arizona. Cross the sun-battered top of the hill. Pass the ruins of Sinagua pueblos perched on the edge, looking over the valley. 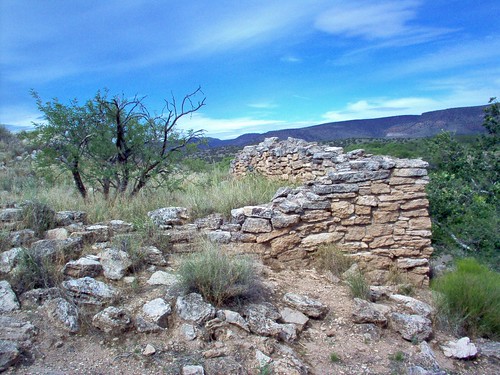 A clifftop ruin at Montezuma Well. Photo by Dana Hunter.

And then follow the trail down the outer wall of the Well. Suddenly, we're out of the scrubby piñon and juniper that thrives on top: between the cliff and the creek, tall Arizona sycamore and willow trees thrive. The sparse shade becomes abundant. The temperature drops by twenty degrees or more. The air is filled with the rustle of leaves and flowing of water. 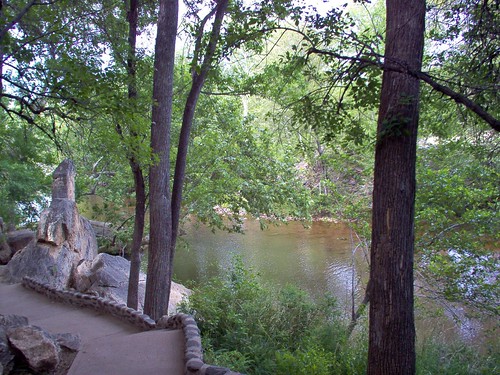 A view of Wet Beaver Creek from the trail alongside the outer cliffs of the Well. Photo by Dana Hunter.

Along the cliff, a narrow but deep stream runs. You can follow it to its source: the outlet of the swallet. It's obviously not a natural stream. It's been deliberately shaped, in places walled up with small limestone blocks. What makes it utterly fantastic is the fact that it wasn't built by modern settlers. It's an ancient Sinagua canal, and it runs for almost a mile. The calcium-rich waters have deposited a natural cement, shoring up the walls and allowing it to survive this long. Some of the canals in the area date back 1,300 years. And some of them are still in use! 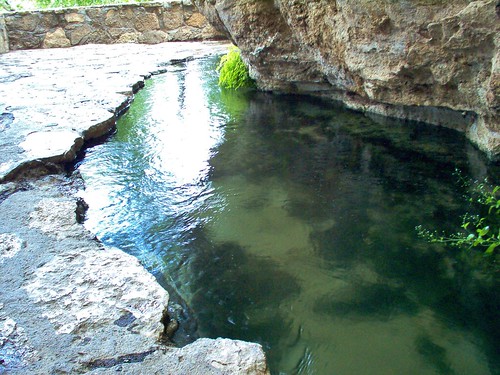 A portion of the Sinagua canal, with maidenhair ferns at the bend. Photo by Dana Hunter.

This is a wonderful place to linger, sitting on huge limestone blocks that have fallen from the cliff, admiring the peaceful canal and gazing over the fast-flowing creek as you ponder the incredible chain of events that combined to form this desert karst oasis.

Phillips, Patricia and Tecle, Aregai (2002): An Analysis of Human Settlement Impacts on Riparian Areas in the Beaver Creek Watershed of North Central Arizona. Hydrology and Water Resources in Arizona and the Southwest. No. 32. Arizona-Nevada Academy of Science.

What We Can Learn from Studying UFOs

A Glitch Has Knocked the Hubble Space Telescope Offline--for Now

It's Not You, It's COVID: Couples Who Blamed Pandemic for Tensions Stayed Happier

How to Prevent the Next Pandemic

Save 30% on all subscriptions

Visiting a Desert Karst Oasis: A Vanished Lake in the Great Green Valley

Where No Maps Have Gone Before!