First, let me take your breath away. Just for a moment. I'll give it back, I promise. 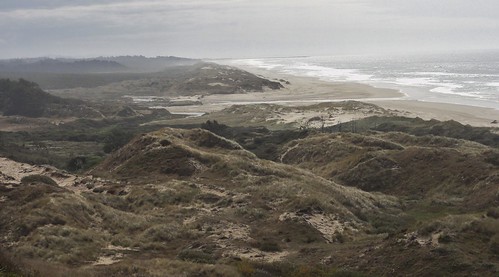 Back in 2010, my intrepid companion and I went geotrekking with Lockwood, and he took us to see some ethereal dunes on the Oregon coast just north of Florence. This photo comes from a viewpoint somewhere past Darlingtonia Wayside. The grass-covered sand seems to stretch away into forever. It's sand as I'd seldom seen it growing up. But I've lived my life surrounded by dunes.

Where I grew up, sand dunes were a dry-land sort of thing. There's all sorts of places in Arizona where you can do the dunes, Yuma being among the more impressive. We passed through there on the way to San Diego once, and I recall being rather astounded by the sea of sand. Those dunes would qualify as mountains in some of the flatter parts of the country. I snapped a picture of them on the way through, but have since lost it. So, engage your imagination, and pretend we're looking at a picture of pale yellow sand looming outside the car window, with a wonderful little blurred bare tree accenting just how much sand and how little vegetation we're looking at.

The dunes I grew up on had long given up on being shifting sands. They'd once been as wild and free as the sands of Yuma. But when I knew them, they'd become rather different: 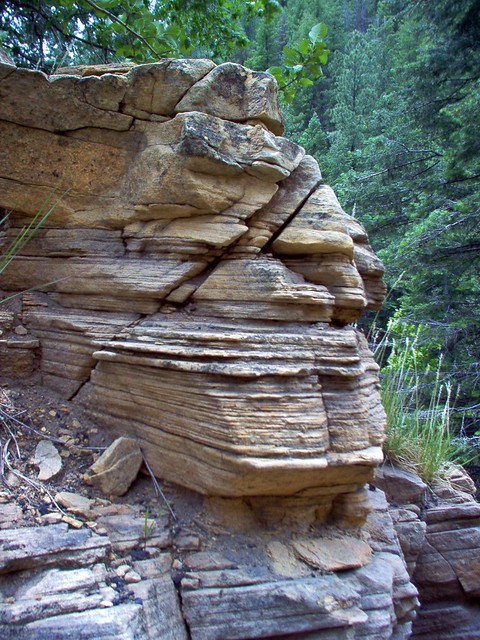 Once, this part of Northern Arizona was covered in pale sand piled up into dunes.They're now fossil landscapes.

You can find lithified dunes all over Arizona. Some of them, like the Coconino, were typical dune colors. Some, like the red sandstones of Page, were rather more striking. I spent quite a few years running over the slickrock, without ever knowing I was exploring an ancient dunescape. It may have once looked like Sossusvlei. That's a heck of a thing to contemplate.

There's a reprise of that ancient desert along the highway to Page, at the top of the cliffs just after 89a splits off. You go through a magnificent road cut blasted through the ancient dunes, and right on the other side, cuddling the cliffs, you'll see little red sand dunes. The sandstone there is returning to its roots. New dunes can be created from the remains of ancestors hundreds of millions of years old. Geology is almost magical, when you realize that.

Down in Sedona, you can travel through a variety of sandy old landscapes, deserts and coasts, and they loom over you at Slide Rock. It's dramatic scenery. Too bad my beloved Misha didn't appreciate it. 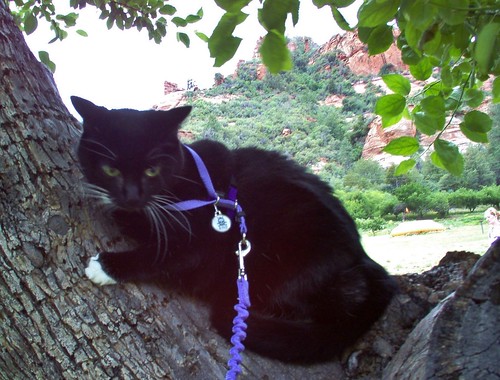 Misha in a tree at Slide Rock State Park. You can see the storied red rocks in the background. This was taken during one of two epic road trips we went on in our 23 years together. I miss you, kitten. Credit: Dana Hunter

I spent quite a bit of my life getting my socks stained by the bright red sandstones of old coastal dunes and mudflats, while lithified desert sands reared above me.

Yeah. It's probably pretty obvious why I got interested in geology. Growing up on the Permian Riviera will do that for ya.

In Arizona, the sand dunes that have not got turned to stone don't tend to have much vegetation on them. So it's fascinating to loop back round to Oregon, and see so much stuff growing on the sand that the dunes are practically immobile. Not to mention all that blue, wet salty stuff off to the west.

Some misguided fools last century actually planted some sort of grass so the dunes would stop moving around and annoying the land owners. And it's done a bang-up job of paralyzing once-free dunes. But here and there, the sand slips free. And at Oregon Dunes, which Lockwood and I visited in March of 2012, you can see dunes as they're meant to be. 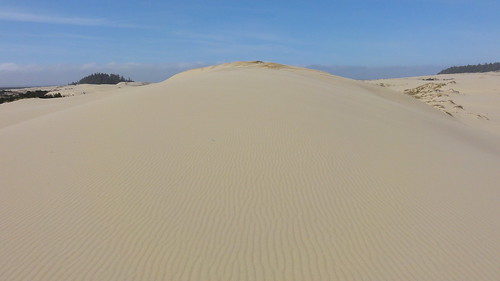 A Healthy Environment as a Human Right

Biden's Climate Summit Will Be an International Chess Match

4 hours ago — THE EDITORS

Algorithm Virtually Unfolds a Historical Letter without Unsealing It

Permanent Impermanence, or How the Fudge Did That Fossilize?