After getting frozen in Washington's Ice Age, let's warm up with a little science at the Burke! Once you've left the Ice Age exhibit, there's another hands-on science area where kids and adults can hang out with a microscope and make tiny things big. 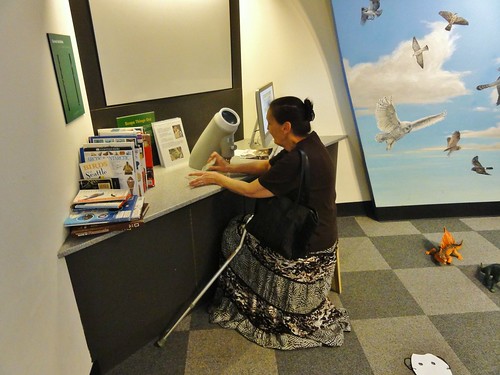 You can see from the toys on the floor that there's plenty for small children to do while the children ages 3-145 play with the slides. There are also drawers full of bird, plant, and mammal collections that you can pull out and explore.

Once you've filled yourself to the brim with hands-on science, you can step over to one of my favorite displays at the museum: a huge wall that's all about evolution. 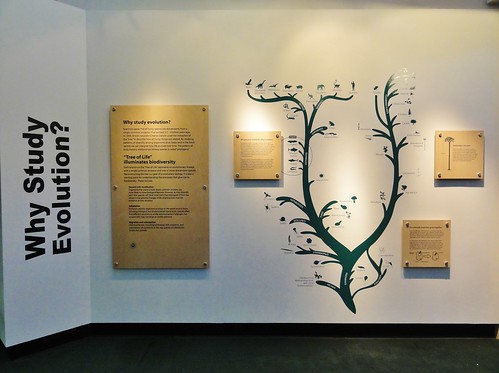 Further along, you'll come to another wall full of fieldwork and samples. This is a dense and awesome display full of information about what Burke Museum scientists have been discovering out in the field. I love this inside view into how science is done! And it's got a distinct sense of humor in many places. 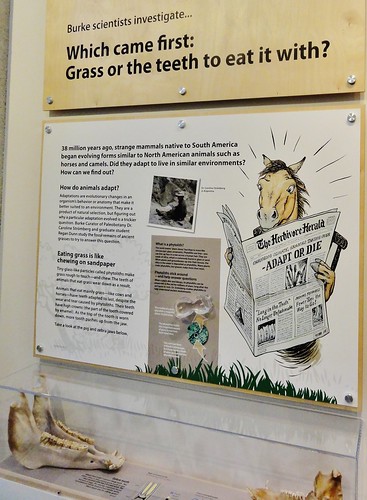 I love how startled this horse looks. Credit: Dana Hunter.

Samples in Plexiglass cases mounted below the displays contain helpful samples illustrating what field workers are uncovering. Here, for instance, one can get an up-close view of the evolution of equine teeth. 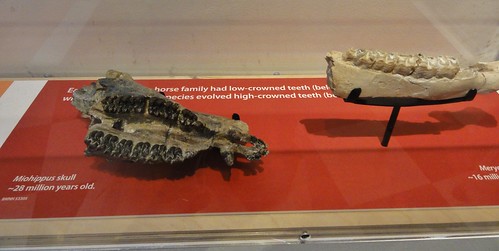 You can even get a look at a field notebook, which is one of my favorite things ever. 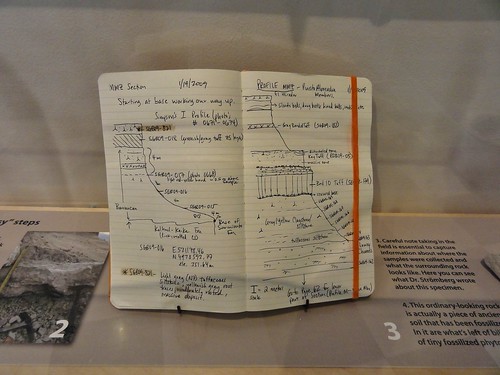 This is what science looks like! Credit: Dana Hunter 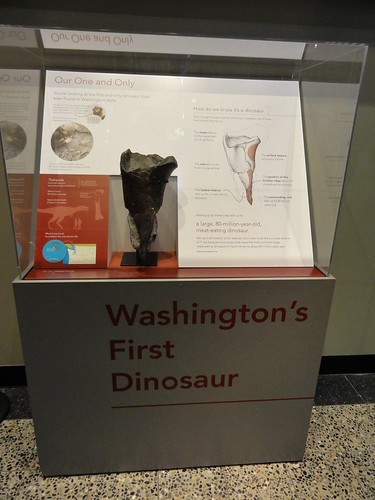 I mean, it's not exactly from around here, but then again, most of Washington State came from somewhere else. We've been plastered to the North American continent in bits and pieces over the last several hundred million years. Still. It is a fossil found within our borders, and since dinosaur fossils are incredibly rare here, we're excited!

The fossil is a partial left thigh bone of a theropod dinosaur, the group of two-legged, meat-eating dinosaurs that includes Velociraptor, Tyrannosaurus rex and modern birds. It was found along the shores of Sucia Island State Park in the San Juan Islands.

The fossil is approximately 80 million years old and is from the Late Cretaceous period. During that time, the rocks that today form Sucia Island were likely further south. How much further south is a topic of scientific debate, with locations ranging between present day Baja California, Mexico, and northern California. Earthquakes and other geologic forces that constantly reshape our planet moved the rocks north to their present-day location.

That's a heck of a long way for this fossil to travel. 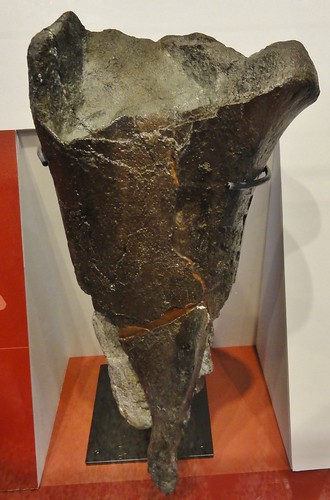 I'm hopeful we'll find other dinos that hitched rides on exotic terranes and became one with us.

Now that you've been through the permanent science exhibits, you've looped back around to stand opposite from the display case you saw when you first entered. Now that you've read up on evolution and all, it's a great time to take a closer look at the lovely skulls on display. Can you identify the animals they're from?

I'll give you a hint: there's a nutria, raccoon, red fox, beaver, and bobcat. The nutria should be super-easy! And that in turn should help you figure out the beaver.

There's so much more to the Burke, but we're going to stop here with the permanent non-anthropology science exhibits. Explore their website to see what temporary exhibits are in town, and visit the anthropology section downstairs. I'll probably write those displays up at my other blog En Tequila Es Verdad soon. I'll link here when I do for those who love culture as much as geology.

How a Remote Indigenous Community Fought the Pandemic

The 'Hydrogen Olympics' Lit a Torch for the Clean Fuel's Future

Why Do Variants Such as Delta Become Dominant?