Let’s have a road trip, shall we?

We’re on our way to Mount St. Helens today. The skies are very nearly clear – by Washington state standards, anyway. Warm sun mingles with a cool breeze that snickers about autumn’s imminent arrival. You’ve got your nose plastered to the car window as we drive up Spirit Lake Memorial Highway from Castle Rock. All you’re seeing at this point are low hills and a flat bit of valley, plastered with green stuff. Biology is a perennial problem for geologists round here. You can barely see the hills for the trees. And you can’t even tell we’re driving along the shore of a lake. But here it is: visible in satellite views, anyway.

We turn off at the Mount St. Helens Visitor’s Center. Lovely building, quite a lot of nice displays, and a nice nature trail along Silver Lake.

And you’re just burning for your first glimpse of Mount St. Helens her own self, but the clouds aren’t cooperating. That’s quite all right, because I want you to focus on the lake for a bit. Maybe it’ll help if I tell you Mount St. Helens created it. 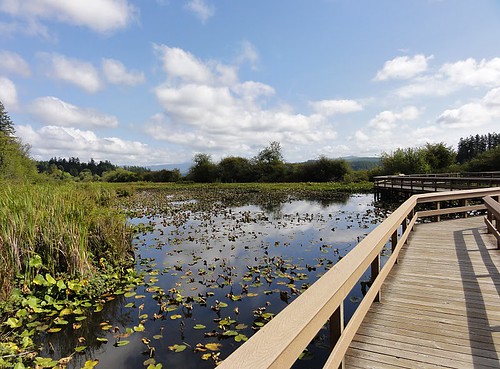 This isn’t the best place to be if you don’t like (geologically) frequent lahars. The Toutle River, which has its origins on the north and west flanks of St. Helens, passes by just a bit north of here. It has a distressing habit of frequently channeling lahars. Some of them happen when Mt. St. Helens has a bit of an eruptive episode. Others happen when debris dams holding back bodies of water like Spirit Lake fail. Next thing you know, there’s quite a lot of rock-filled mud sloshing round the place. Happens all the time.

Now you’re looking for deposits from the 1980 eruption, aren’t you? Don’t bother. Even if the riotous vegetation wasn’t hiding all the lovely geology, you wouldn’t see much. 1980, for all it left a mark on us, didn’t really touch Silver Lake. Those lahars kept themselves to the river channel, and only left deposits about two meters thick. A mere six feet. Nothing a river can’t clear out in thirty years.

Not that it didn’t get interesting. Here’s a nice USGS photo of a house on the riverbank near Tower Road, not far from here, that shows how much damage was caused even thirty miles from the volcano: 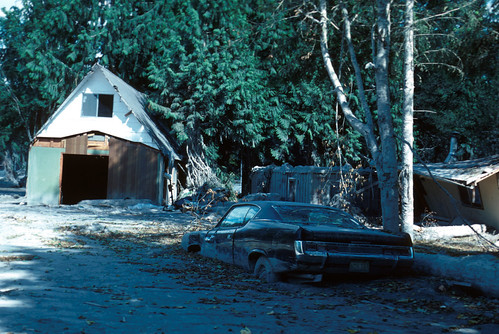 See how the paint got stripped and the windows busted out on the first floor? And the poor tree trunks are a bit scoured. Roads didn't fare well, either - State Route 504 wasn't exactly drivable two miles upstream of the Coal Bank Bridge. 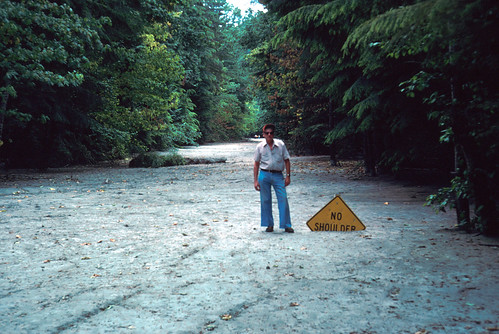 Gordon Coyier standing on what used to be SR 504 and is now a mudway. Credit: USGS

Certainly no shoulder now, is there?

I'm showing you these images to impress upon you the power of a lahar, and as a prelude to telling you this: the one that created Silver Lake was a hell of a lot bigger.

The lake's only 2,500 years old. One day, around the same time Greece was starting to really come into its own and the Buddha was holding up flowers and waiting for one man to smile, Mount St. Helens had an episode. It's called the Pine Creek eruptive period. Oh, baby, she blew. Pyroclastic flows everywhere, and four lahars. We're especially interested in PC1, the lahar that created the placid little lake we're viewing.

Mount St. Helens has a habit of unleashing debris flows that dam up lakes. She'd dammed Spirit Lake (or possibly an ancestor thereof), but hadn't done a thorough job of it. The debris dam failed repeatedly. The first massive outburst scooped up all the lovely loose alluvial and volcanic deposits it encountered and mixed them up in a nice, thick lahar that went thundering down the Toutle River. PC1, as it's known, was historic, the largest ever to travel down the river. Above Coalbank Rapids, it discharged at 200,000-300,000 meters per second. To put that in some perspective, imagine the middle bit of the Amazon racing down the Toutle River valley at flood stage. Now imagine it isn't merely water, but a slurry of rocky mud. That's huge. Far larger than those paltry little lahars we witnessed during the May 1980 eruption.

And when it reached Coalbank Rapids, it found itself facing the same problem as a stadium crowd stampeding out the exit at a sold-out concert: a constricted egress. All that mud had nowhere to go but up-valley. It spread out, burying the landscape under thick sediment and rock, and a little tributary creek named Outlet Creek discovered it suddenly didn't have an outlet anymore.

It wasn't strong enough to cut through that enormous quantity of debris, so it ponded behind the lahar. Silver Lake is, in fact, a lahar-margin lake, and a rather large example of the breed. It's over fifteen square kilometers. But before you get too impressed, keep in mind it's only about 5 meters (16ft) deep at its deepest. Some measurements have it shallower. If you stand there waiting for a catastrophic flood as the lahar dam fails here, you're going to be desperately bored. They actually had to install a weir and a drainage channel in 1971 because it got backed up in stormy weather. So, no chance of aquatic drama here. But this dear lake has seen enough drama.

So, as you look east hoping for a glimpse of St. Helens, keep in mind you're looking toward the spot where a ginormous lahar wreaked havoc a geologic moment ago. Go diving - okay, probably more like wading - in the east bit of the lake, and you can find that old lahar under all the detritus. Down here at the western end, where the lahar didn't reach, it's mostly clay, silt and sand, with a bit of peat. I swear this lake's aspiring to become a coal field someday.

The little basin it fills is surrounded by mid-to-late Eocene volcanics, lots of basalts and basaltic andesite. This area's seen a lot of volcanism as continents collided. Kick around this quadrangle (pdf), and you'll even find our old friends the Columbia River Basalts, along with the birth of the Cascades and plenty of deposits from Mount St. Helens her own self.

And there she is, the grand old girl, just barely peeking out from the clouds at last: 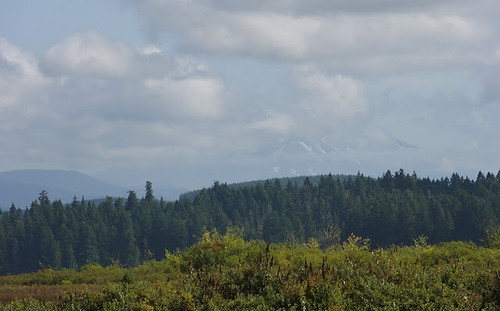 We'll kick round here a bit longer, among the birds and dragonflies and peaceful marshy lake life, before we get back in the car and head up the road to see firsthand just what a lahar does to your nice new house.

Scott, K.M., 1989, Magnitude and frequency of lahars and lahar-runnout flows in the Toutle-Cowlitz River system: U. S. Geological Survey Professional Paper 1447-B (pdf).

How Elvis Got Americans to Accept the Polio Vaccine

How the Suburbs Could Help Save Biodiversity

The Timeless Journey of the Möbius Strip