I've been away from blogging for quite a bit - I went on my honeymoon last month, and then I moved, then I went to a week-long conference about microbiology. One of the most surprising things to come out of that last for me was the stunning evidence of the effects of antibiotic use on obesity in a talk by Martin Blaser. The take home: for reasons that aren't entirely clear, antibiotic use especially in early life increases the risk of obesity.

But let's back up for a second. The link between antibiotics and weight gain isn't really new. Farmers have known about this for ages, which is why the majority of antibiotics consumed in the united states are consumed by animals. The principal focus by scientists on the agricultural use of antibiotics has been on the public health impacts of increasing antibiotic resistance - a dire problem to be sure - but beyond resistance, I had never considered what this meant about human use of antibiotcs.

Blaser quite convincingly drove this point home. I wish I had access to his slides, but you can watch a video of a similar talk he gave at the NIH earlier this year. One of the most surprising points was that use of antibiotcs varies by state, and that this variation closely tracks with prevalaence of obesity by state. 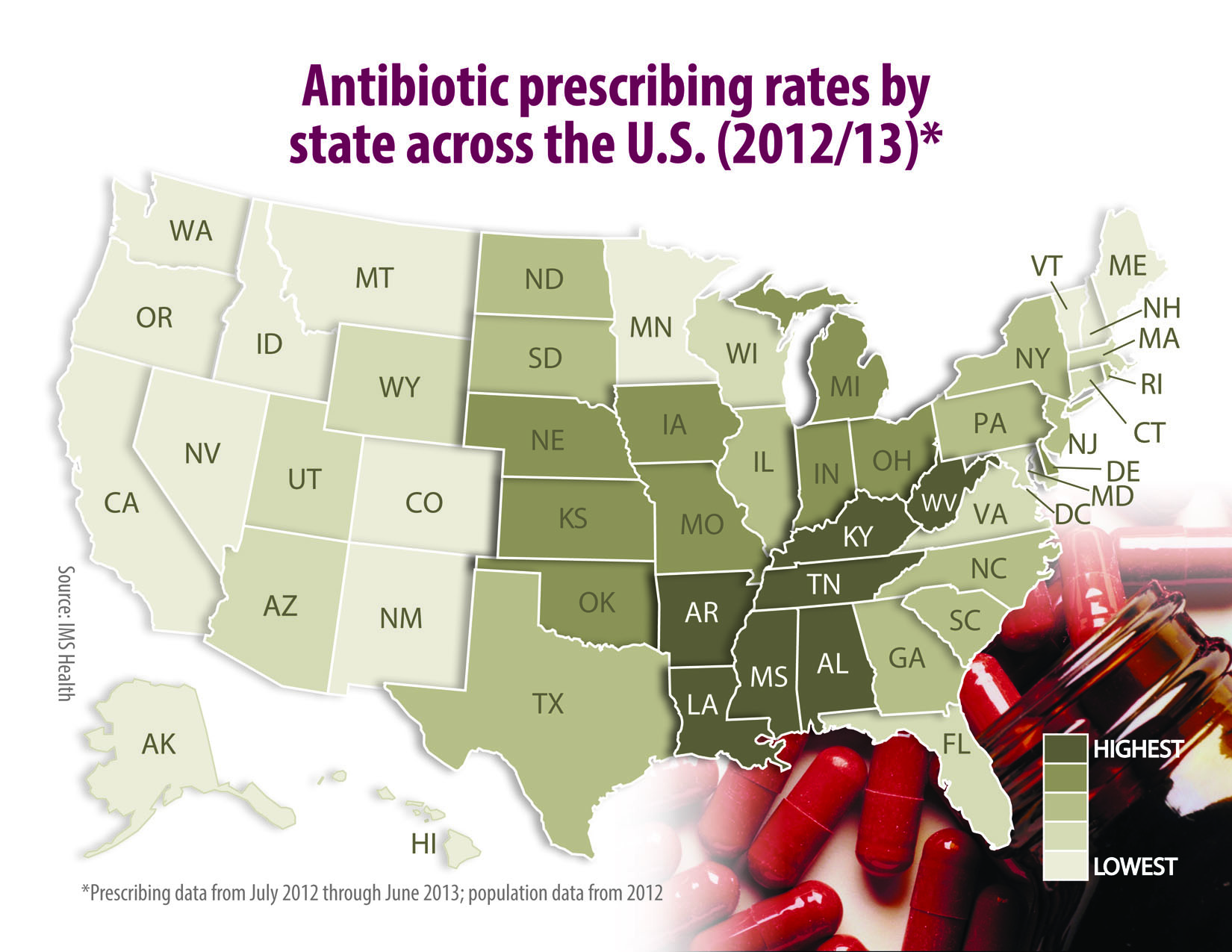 Image from the CDC

These images are only the most recent data, but the trend holds over time. The first objection any skeptics out there might raise is the old standby, “correlation is not causation.” Though this is true, a missing piece of that adage is the fact that correlation can be a powerful hypothesis generating tool - certainly not enough to prove something, but worth investigating. And that’s exactly what Blaser’s lab did.

In a study published back in 2012, they investigated whether subtherapeutic antibiotic treatment (STAT) of the sort given to livestock would cause mice to gain weight. Unsurprisingly, just like pigs and cows, mice gain weight when treated with antibiotics.

Cho et. al. went further, and showed that this sort of antibiotic treatment caused alterations in the gut microbiome of the mice that led to altered metabolism and increased production of short-chain fatty acids. In a later study (unpublished I think - you can see the data at ~19:20 in the video), they combined this STAT treatment with a high-fat diet (also sometimes called the “western” diet), in which the nutrition of the mice more closely resembles that of an American. These mice get fat of course, but the shocking thing is how much the antibiotics increase this weight gain.

“OK,” you might be saying, “but human children aren’t given subtherapeutic antibiotics throughout life. This isn’t really relevant to people.” That’s true, but this work establishes the model, and they didn’t stop there. In a wonderful study published last year in Cell, Cox et. al. looked at how early antibiotic exposure would affect weight gain later in life. Mice were treated with low doses of penicillin for 4 weeks, 8 weeks or 24 weeks, but it didn’t matter. Regardless of how short the dose, mice treated with antibiotics gained significantly more weight than mice that had never been exposed.

LDP means "low dose penicillin," the different numbers are how many weeks the treatment lasted.

Since they were discovered in the early 20th century, antibiotics have saved countless lives, and they remain a powerful tool to combat disease. But we’ve misused these valuable resources, and now we’re going to have to struggle with the consequences.

Kevin Bonham is a Curriculum Fellow in the Microbiology and Immunobiology department at Harvard Medical school. He received his PhD from Harvard, where he studied how the cells of the immune system detect the presence of infectious microbes. Find him on Google+, Reddit. Follow Kevin Bonham on Twitter

Ain't Nobody Got Tine for That! The Invention and Evolution of the Fork

Sugar Was a Spice and Not Always so Nice