Author’s note: My blog survey continues, and all readers -- even new ones -- are invited to take it! Please see the end of this post for details.

If you sift the mineral particles from conifer forest soil, wash them, and examine them under a microscope, you will discover a startling detail: tiny tunnels, three to ten micrometers across.

The tunnels curve and branch and sometimes more than one pierces the same particle.

What could have created these microscopic boreholes? They do not resemble chemical weathering, which cuts sawtooth grooves into minerals, like the seismograms of earthquakes.

The tunnels seem like they were made by something … alive. They are the spitting image of hyphae – that is, filaments – of fungi. 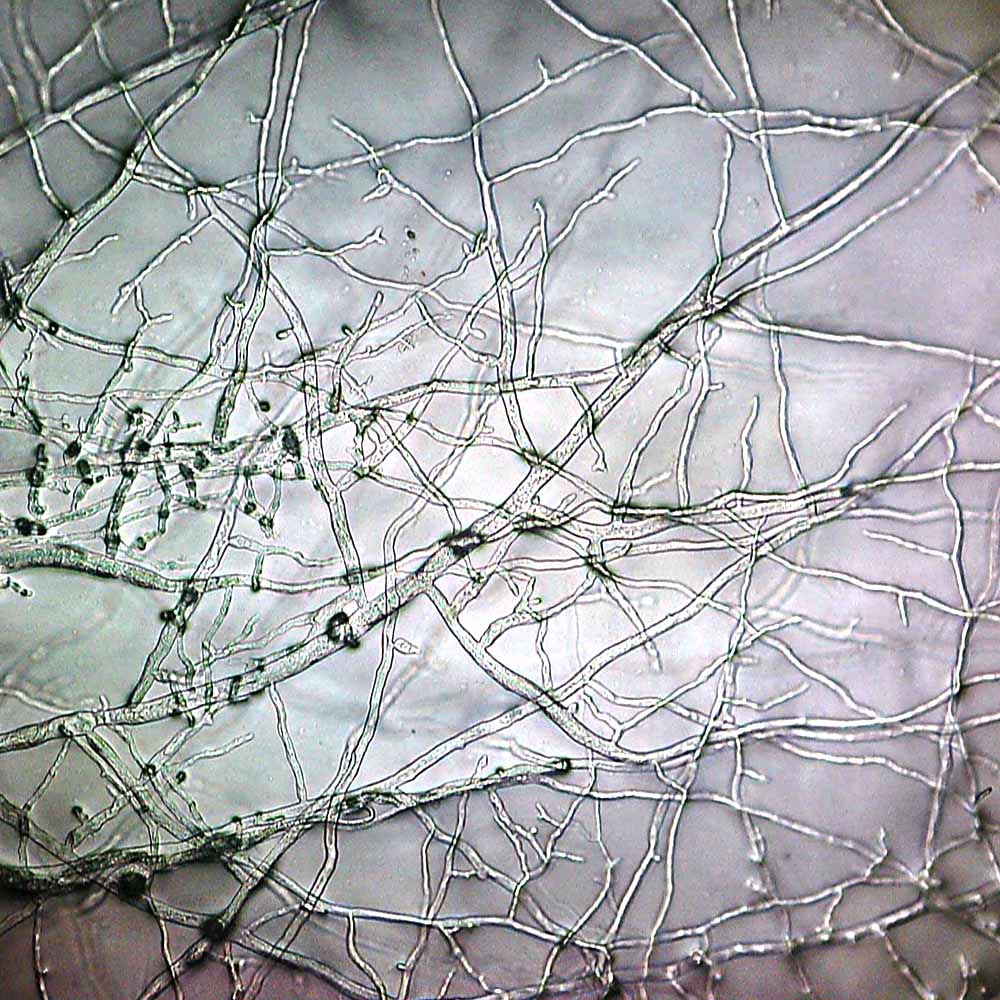 But why would a fungus tunnel into a rock? There’s no food there, and it no doubt takes a sizeable capital investment to assemble and secrete the acids necessary to eat raw rock.

There is a precedent: lichens. The crusty creatures, a combination of fungi, algae, and attendant bacteria/archaea, are the first and last word in Earth-based rock colonization. Wherever naked stone is found, lichens will be there.

They cover almost 10% of Earth’s land surface, and if you are paying attention on your next forest or tundra hike, you will be astounded to note just how much real estate they have staked out – not just on rocks, but also on tree bark and soil.

The fungal half of lichens are the drilling specialists, excreting acids that break down rock and enable the fungus to get a hypha-hold in micro-trenches, cracks, and etch pits (small lens-shaped cavities formed by the action of water). The acids are derived from the food that the algae provide to the fungus.

But the shafts in the photos at the top of the page were found nowhere near a lichen or a boulder. They were inside little bits of stony soil.

What other fungi could be driving these tunnels?

Scientists have long known that mycorrhizal fungi – those that live symbiotically in and on the roots of plants – trade minerals and water they absorb from the soil for food that plants manufacture from sunlight, carbon dioxide, and water.

Fungi found around the roots of many woody shrubs and trees -- particularly the ones that dominate northern forests -- are are thought to be “ectomycorrhizal”, which refers to the way in which they envelop roots.

The fungus forms a root sheath called a “mantle”, and from this mantle, it sends hyphae both into the soil and into the root. The hyphae that invade the root do not actually invade the cells there. Instead, they weave a web around them, a structure known as the “Hartig Net”.

Why would a tree put up with such a flagrant home invasion? To start, the net is a secure place where the fungus and the tree can exchange goodies.

But fungi are also particularly good at seeking and absorbing (you might think of them as biological “Bounty”) owing to their diffuse bodies, which comprise a vast network of tiny tubes that max out surface area. Since fungi live in their food and secrete their digestive enzymes directly into it before resorbing the digested slurry, they are effectively one giant inside-out intestine (to those of you who dislike mushrooms, I apologize for putting you off them forever now -- though if it helps, mushrooms themselves generally do not digest anything, being strictly reproductive structures. That doesn't help either, does it?).

Unassisted, trees are limited to their own relatively meager collection of root hairs, found only near the tips of roots. The rest of the root is just a conduit. Fungi, by contrast, absorb across their entire bodies. Furthermore, root tips are vastly larger than a hypha. Even root hair cells – the finest filament available to roots, which sprout from the side of root tips -- are around 15 micrometers in diameter. That’s one and a half to five times as large as a hypha. You can easily see them with the naked eye.

Taken together, these traits mean fungi can probe and penetrate crevices that roots and root hairs cannot. Thus by partnering with fungi, trees can make use of a much larger soil volume than roots alone could do, and can consequently absorb more water and nutrients than trees without fungal partners.

Ectomycorrhizal fungi hold up their end of the mycorrhizal compact by secreting acids that dissolve mineral particles from a distance. Via special digestive proteins called enzymes, they can also access organic forms of nitrogen and phosphorous in the soil (like amino acids, peptides, proteins, amino sugars, chitin, and nucleic acids) that plants wouldn’t otherwise be able to exploit. But there is a lot of other competition in the soil for these nutrients -- from other fungi, from bacteria, and from protists.

And the tunnels in those mineral particles sure looked suspicious.

One clue can be found by looking at thin sections of fungus-enveloped root still embedded in soil. In this sample, probing hyphae sprouted from the mantle have wrapped mineral particles in a fungal embrace.

Scanning electron micrographs of these particles show the fungi not only grasping, but invading them.

As you saw in the image at the top of this post, thin cross sections taken from tiny pieces of feldspar and hornblende – common minerals in conifer forest soil – reveal tunnels inside with rounded ends, curving paths, and constant 3-10 micrometer diameters that also seem to finger fungi as their drivers.

Scientists speculate that secretions of organic acids at the tip of the hyphae driving the tunnels release potassium, calcium, and magnesium ions from the mineral, simultaneously excavating the tunnel and releasing these valuable elements for absorption.

Could anything else be responsible?

Scientists have also observed that the tunnels are found most commonly near the soil surface, and much more rarely deeper down. That definitely seems to implicate something alive.

And as mentioned above, the tunnels look radically different from the etch pits and saw-tooth cracks that are the hallmarks of purely chemical weathering.

As a result, scientists now think ectomycorrhizal fungi have *two* ways of shanghai-ing nutrients for their trees, summarized below.

Fungal mining has many advantages. Some feldspars contain pockets of apatite, a major source of phosphorous in forests. By excavating these otherwise locked nutrient chambers, fungi are able to access a phosphorous source that would be unavailable to plant roots alone.

Fungal tunnels and the acids used to make them also speed up mineral decay and increase mineral surface area available directly to plant roots. Futher, fungal mining cuts off competition from other soil microbes for nutrients by accessing minerals in seclusion directly at the source. And it provides trees access to minerals even in acidified soil (the product of decades of acid rain), which can make grabbing them straight from the soil more chemically difficult.

The speed with which fungi drive their tunnels is not blinding, but not glacial either, considering the miner is just a few micrometers across. One estimate suggests that the tips of fungal hyphae could be pushing their leads at the rate of 0.3-30 micrometers per year. If so, the authors calculated that 150 meters of pores are formed each year per liter of “E horizon” soil – a type of forest dirt leached of many minerals. In this same relatively small volume, 10,000,000 hyphal tips would be tunneling into sand grains at any given moment.

Spread across the soil of an entire planet, the extent of fungal mining surely dwarfs anything  undertaken by humans. Its scale, and the volume of soil that fungi have helped create over what may be half a billion years of delving, beggar belief.

I am curious about you! I’ve teamed up with researcher Paige Brown Jarreau -- author of the blog From the Lab Bench -- to create a survey of all of my readers – new, old, and first-time readers alike. By participating, you’ll be helping me improve The Artful Amoeba and contribute to SCIENCE on blog readership. You will also get FREE science art from Paige's Photography for participating, as well as a chance to win a $50.00 Amazon gift card (100 available, or guaranteed 2 per specific blog included in this survey) or a T-shirt. It should only take 10-15 minutes to complete. You can find the survey here: http://bit.ly/mysciblogreaders.