Author’s note: This is the latest post in the Wonderful Things series. You can read more about this series here.

It is startling how different the larvae of fish can be from the adults that produced them, as I wrote in a blog post a few months ago. But even I was shocked by the larva of this mystery species of moray eel:

It is hard to believe the sinuous ribbon of this larva's body -- with a comically tiny head plopped on the front -- will ultimately belong to a fish, although eel does seem like the most likely option if fish is the destination. When I first saw it, I was struck by its likeness to the Venus's girdle, Cestum veneris.

Venus's girdles are ctenophores, or comb jellies, from waaaaay over on the other side of the animal family tree. Yet the two are strikingly similar, right down to the stripe that runs down the middle of the transparent ribbon (although the Venus's girdle also has a central crossbar that the eel larva lacks).

Divers recently discovered these eel larvae in the waters of southeast Asia. You can see through them because their bodies are radically compressed and their organs and muscles vastly reduced. They possess a simple tube gut (the stripe down the middle) and their pane-like bodies are filled with a clear gel. The gel contains glucosaminoglycan (GAG) compounds that will be transformed into adult tissue during metamorphosis.

Since all these larvae seemed to be on the brink of metamorphosis(they lacked teeth, a common sign of this process in morays), the younger versions may live out in the top few hundred meters of open ocean while doing their larva thing. When ready to make Extreme Makeover: Eel Edition, they may swim to the reef to find a hidey hole for that purpose.

For some reason, eel larvae -- also called leptocephali -- grow much larger than other fish larvae before metamorphosing into an adult. But the leptocephali of most morays tend to metamorphose at a smaller size than these larval titans. Most hit maximum size at 9 cm, but these larvae were in the 30-40 cm range. That's a nearly 16-inch larva.

Indeed, the larvae in the video -- spotted between 2008 and 2011 in the Indonesian Archipelago -- all appeared to be a type of moray larva never seen before. So the team of scientist-divers who filmed them set out to see if they could guess what they would grow up to be, and published their results last year in Marine Biodiversity Letters.

One clue was found at the tip of one particular larva's snout: it had developed small, externally protruding nostrils. Second, all the larvae swam with jaws fixed in an open scowl. Finally, there is the long, thin, ribbon-like body of the larva. All three traits suggest this little charmer:

You can see here the astounding transformations these eels may undergo not just from larvae to adults, but throughout their lives. The various forms look so different they were originally classified as separate species before it was realized they were different life stages of the same animal.

There are a few other suggestive facts. Ribbon eels are widely distributed across Indonesian waters, just as these larvae were. And adult ribbon eels prefer to live in the same type of habitat where the larvae were found: coral rubble, sand, and silt, but not living reef.

The only way to know for sure, the authors say, is to catch one, kill it, dissect it, and sequence its DNA. Or, there's the more direct method: catch one, take it to an aquarium, feed it, and see what it to see what it grows up to be. If it turns out to be a really cranky eel with gender and wardrobe identity issues, mission accomplished. 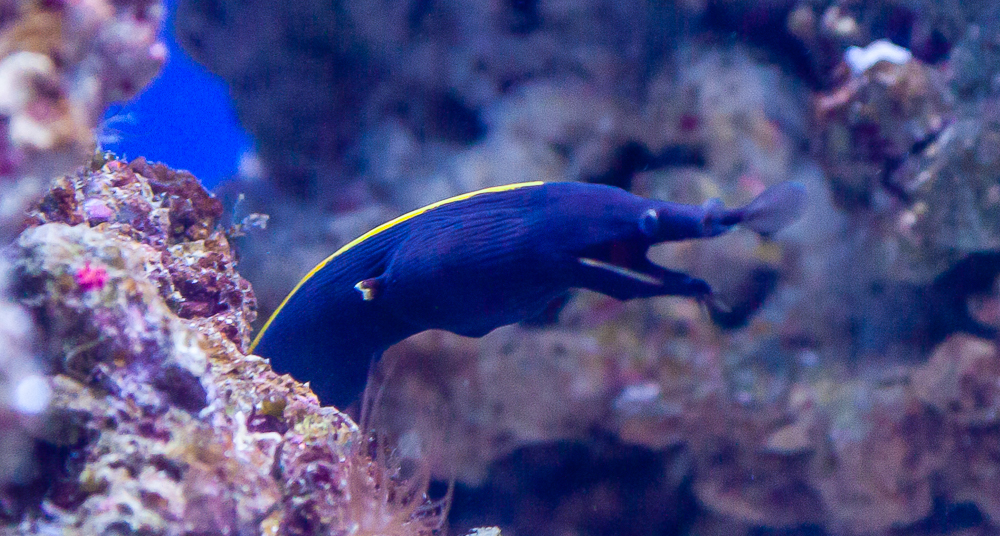 Blog post inspired by video at the end of an article by Matt Simon at Wired. Thanks for the idea Matt!

How Zooplankton Bust a Move