Blogger's note: I'm still away from the blog taking care of important life stuff, but I'll be back soon! This post originally appeared on March 28, 2010. It has been edited slightly. 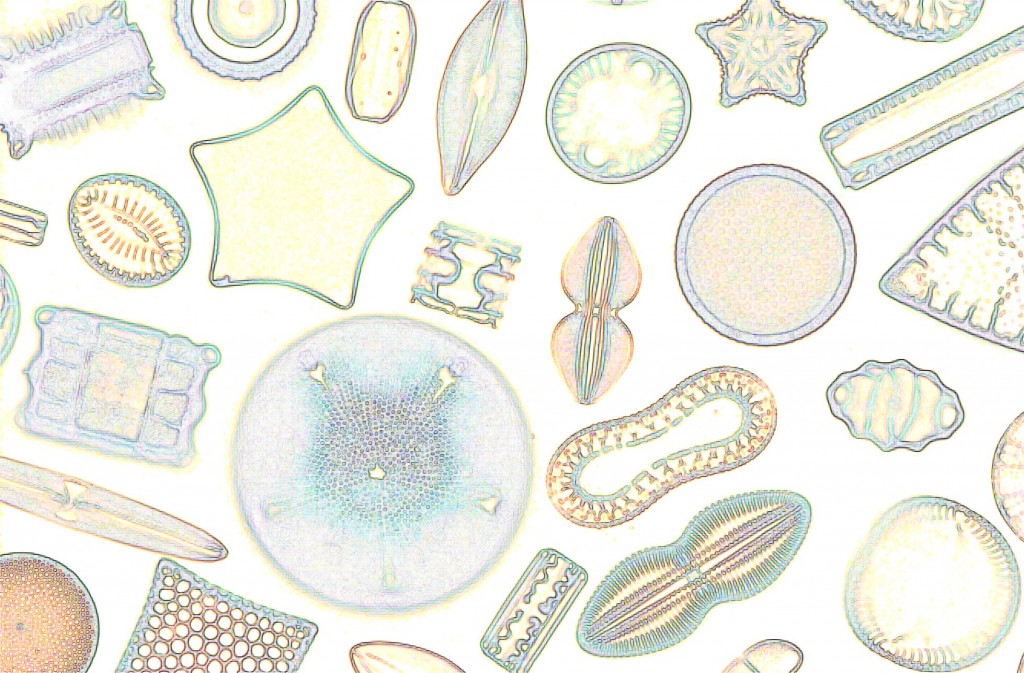 Earlier this week I posted a link to Victorian microscope slides that included arranged diatom art. People really seemed to respond to the diatom image I posted with it, so I wanted to talk a little bit more about what diatoms are and a lot about their amazing shells. Diatoms literally live in glass houses, and as you can imagine, that makes sex, growth, and buoyancy a tricky business. How do you have sex when you live in the architectural equivalent of a petri dish? As they say — very carefully.

A diatom is a single-celled organism that is also considered an alga — for values of algae that include “anything that photosynthesizes(makes food using light) but isn’t a plant or bacterium”. They are in a high-level taxon called Stramenopiles, or Heterokonts, a group that’s a grab bag of eukaryotic(cells with a nucleus) goodness that includes water molds (the oomycetes, a scion of which is responsible for the Irish Potato Famine), the fabulously cool and obscure slime nets (labrinthulids), and the brown algae. Here’s the tree so you can see how everyone’s related.

Heterokonts are mostly algae, and the heterokontish algae are mostly diatoms. The name heterokont comes from the trait the group’s common ancestor likely developed of having two unequal propulsive tails called tinsel and whiplash flagella (love the names!), though some groups (including the diatoms) have mostly lost theirs. Believe it or not, the tinsel flagellum (so called because of all the little hairs on it) actually points forward and pulls the cell through the water.

But enough about Heterokonts/Stramenopiles. Diatoms live in pretty much any moist environment, including mud puddles, wet rocks, film on moss, etc., though they are most commonly found in fresh and saltwater. If you’ve ever swallowed lake or seawater, odds are you consumed some unlucky diatoms.

Somewhere along the way, probably in the Triassic or early Jurassic, diatoms discovered that making their shells out of silica (SiO2, aka glass) instead of cellulose, chitin, calcium carbonate or any other mineral/molecule/protein/sugar saved them 8% in energy costs compared to an organic wall and helped them compete in a crowded phytoplankton marketplace. The glass shells of diatoms have an incredible structure: they come in two halves called frustules (again, love the name!) that fit together like a pill box. For you engineers and artists in the audience, here’s your 1,000 words:

Here’s the problem with this system: when a diatom gets ready to divide, its shells pull apart and one goes with each daughter cell. Once these glass shells are formed, they can’t really be . . . er . . . expanded. With glass, you get what you get. One of the daughter cells gets the big frustule or epitheca, and one gets the little frustule that fits in it — the hypotheca. They both grow new shells that fit *inside* whatever shell they got. If you think about this, you’ll realize that one of these two daughter cells got the raw end of the deal — it can never get any bigger than its reduced-size shell. And one of its daughters will get an even rawer deal.

Carried out indefinitely, the cells keep dividing until they’re so small they simply die. That does not sound like the recipe for an evolutionary WIN. Diatoms could, I suppose, get by on the part of their population that always inherits the biggest shell. But that’s an increasingly small proportion of the population, and let’s face it: after a while that frustrule is starting to seem a bit shabby, out-of date, and funny-smelling. So what is the escape from this evolutionary dead-end?

Sex! You have sex, grow your membrane out into a diatom shipyard, then build an entirely new and full-sized frustule inside. When you’re finished, you simply cast off your old-and-busted frustules and membranes, and Voila! New Diatom hotness!

The above solution is what the centric, or radially-valved diatoms do. Here’s what the rest of the diatoms do (warning: graphic diatom sex image):

Interestingly, diatoms also have a biological clock. If they miss their time to mate and make a new initial cell, they just keep dividing until they get so small they die all alone. Aww. Sad diatom.

So why do these utilitarian glass shells have all these beautiful shapes and forms? I wish I knew. What purpose natural selection has found in them I can’t say, but I can say I appreciate the results — and I’m glad I don’t have to live in one.