There comes a depth at which even fish struggle to survive the titanic pressure. But that depth is only found at the few places on Earth that lie below 27,600 feet of water, where the weight of the water warps piscine proteins and crushes cells. Such a place is the Mariana Trench, which plunges to 36,200 feet in Challenger Deep. The pressure exceeds 1,000 atmospheres.

A few years ago I wrote about what James Cameron's team discovered when they visited the bottom of the trench as part of his Deepsea Challenge expedition. But now scientists have visited not just the floor of the trench, but downed landers late last year at five different depths on the wall of the trench.

By going deep -- but not all the way to the bottom -- they made some pretty amazing discoveries, including a new holder of the title of "World's Deepest Fish". Discovered at 26,872 feet, the fish was still found within the zone calculated by project scientist Paul Yancey to be the hypothetical limit. This discovery was widely covered in the press in mid-December, but the footage of the new depth title-holder that often accompanied these stories wasn't very good. Below is a much better video. It's a curious fish that seems to somehow combine the aesthetics of a tissue paper angel, Flounder from Disney's The Little Mermaid, and Dread Cthulhu.

I should emphasize that the things that look like tentacles are not the same structures as the tentacles possessed by octopus and squid, and I'm not even sure exactly how they're attached to this fish. Are they projections from the mouth area? Or part of those diaphanous fins? They have tentatively identified it as a snailfish. This image of a different snailfish species caught by NOAA seems to suggest the "tentacles" are somehow related to the fin. (UPDATE 1/12/15: Thomas Finger, a professor at the University of Colorado School of Medicine who studies the neural systems of fish called sea robins wrote an email to me to say "[T]he so-called tentacles on this fish appear to be modified finrays of the pectoral fin similar to the modified fin rays on searobins (Prionotus). The fin rays on the searobins are specialized for chemodetecion and the fish uses these to find invertebrates buried in the sand." Fascinatingly, the nerves that service the chemical-sensing fin rays of sea robins -- and presumably, of snailfish -- branch directly from the spinal cord and contain simple chemical-sensing cells of a type found intermittently all over fish skin. This is in contrast to the barbels of catfish, goatfish, and cod which are elaborated from the same nerves that feed the tongue and contain proper tastebuds. You can see a nice photo of a sea robin's pectoral finrays here.] 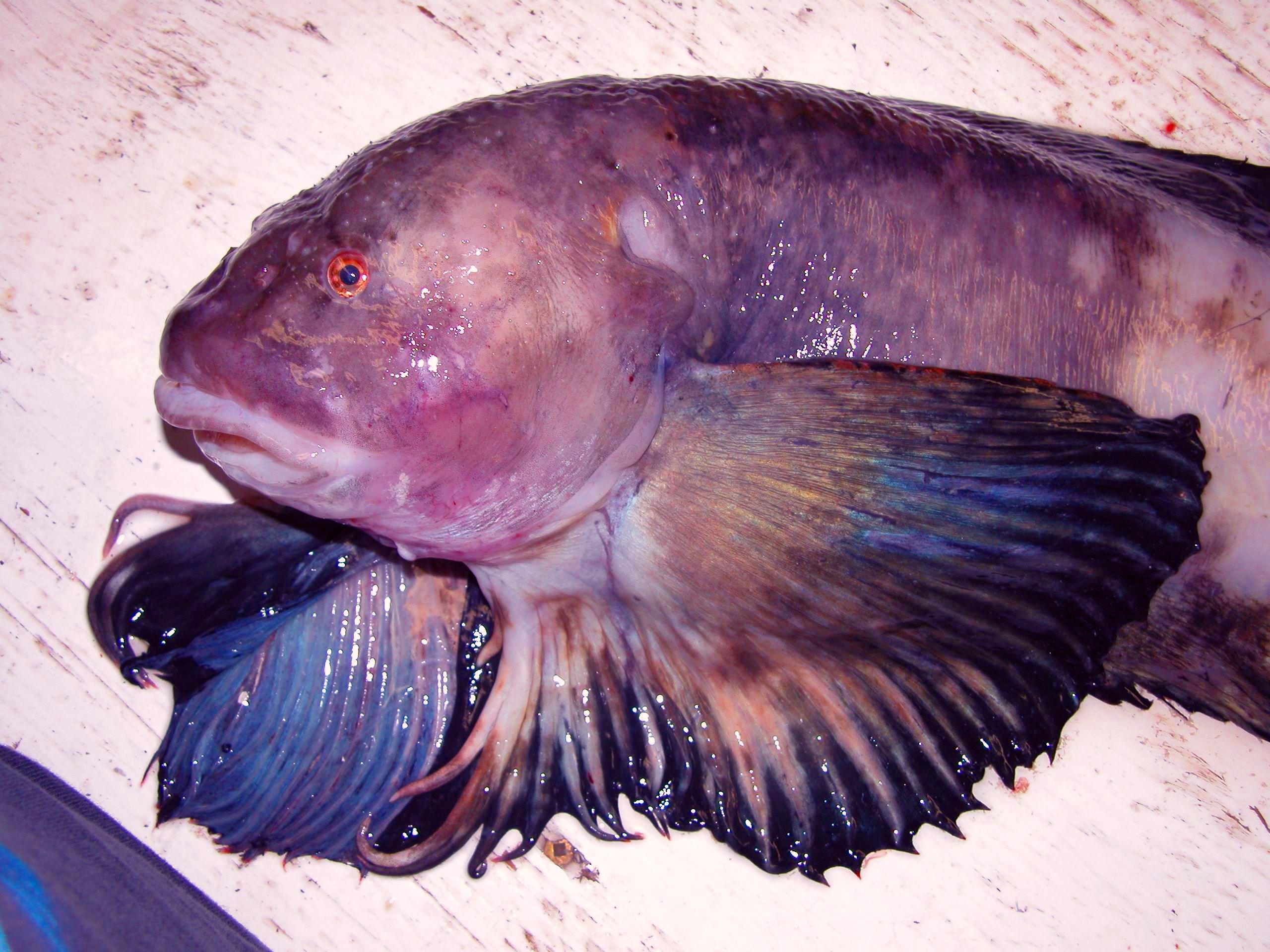 Unfortunately, we don't have a new name to engrave on the Deep Fish Trophy because this fish was only observed by cameras, not captured by a submersible or remotely-operated vehicle (ROV). In the world of biology, if you have no new specimen to describe, you have no new species. Showing up unprepared wasn't by design; the ROV Nereus was originally slated to accompany this expedition, but likely imploded in the Kermadec Trench north of New Zealand last May. A replacement is already under construction.

The new images of this fish were captured by the Hadal Ecosystem Studies expedition (HADES) funded by the U.S. National Science Foundation aboard the research vessel Falkor, which to my delight shares its name with the luckdragon from The Neverending Story (an appropriate spirit to invoke, I think, when one is engaged in scientific exploration). The project dispatched its five landers to depths ranging from 5000 to 10,600 meters (16,400 feet to 34,750 feet). As co-chief scientist Jeff Drazen said, studying only what's at the bottom of the trench is like studying a mountain by examining only what you find at the summit. Here, here.

The fish's incredible ability to withstand pressure owes to its production of large quantities of the chemical TMAO.

This molecule regulates the osmotic balance of cells but also acts as a "chemical chaperone" by supporting proper protein folding and preventing water under high pressure from forcing its way into proteins and deforming their shape, which is critical to their function. The deeper a bony fish lives, scientists have discovered, the more TMAO it makes (intriguingly, TMAO degrades to trimethylamine (TMA), which is the chief chemical responsible for the "fishy" smell of aging seafood).

Ocean fish are hypoosmotic to their environment; that is, the ocean is salty and the inside of fish is less so. In such a situation, the forces of osmosis (remember high school biology?) will tend to cause water to seep from their bodies and into the ocean, producing lethal dehydration. To combat this effect, evolution has endowed fish with a number of systems to fight the escape of water. But each of these systems is predicated on the sea being saltier than the fish.

TMAO, in addition to protecting against increasing pressure, is a solute and raises the osmolarity of fish internally. According to Yancey, the reason no fish is believed to be able to live deeper than about 8,400 m (27,600 ft) is that is the pressure at which the fish becomes as salty as the sea, so to speak (TMAO is actually not a salt but a solute, of which salts are one kind. Solutes are what matter for osmosis). If TMAO concentrations increased further, the fish would become hyperosmotic.

For a fish to swim deeper, it would have to, in effect, reverse its osmolarity regulation systems, from trying to prevent water from leaving, to trying to shove it out the door. This is not unheard of; salmon do it every time they cross from freshwater to saltwater or vice versa. But they must pause and wait hours or days at the boundary for their gills and kidneys to transmogrify. Yancey considers it unlikely that any deep sea fish would swim down to a certain depth, hang out for hours or days for their bodies to reconfigure, and them swim lower.

The reason deep sea bony fish may find this particularly difficult may have to do with their evolutionary history. Fossils and the biology of bony fishes strongly suggest they all evolved in freshwater and re-invaded the ocean later. In freshwater, the concentration of solutes in their bodies far exceeded that in freshwater and they evolved structures in their kidneys called glomeruli (you have these too) to deal with the imbalance. They also seem to have lowered their bodies' osmolarities to levels much lower than seawater, probably to save on osmolarity regulation costs.

But when bony fish re-invaded the ocean where the water salinity was once again much higher than that inside their bodies, they never returned their osmolarities to higher levels; today most shallow bony fish have internal osmlarities about 350 mOsmol/kg, while ocean water is 1,100 mOsmol/kg. The structures like glomeruli that they had used in freshwater were shut down since they were now useless. In many lineages -- especially deep sea fish that have never re-invaded land since -- they have simply disappeared. So deep ocean fishes' brief flirtation with freshwater lowered their body's osmolarity and made them active regulators of it, but their retreat to the ocean and continued stay there has robbed them of the structures they'd need to live in a deep sea environment where they'd -- ironically -- be living as they were in those far-off days in freshwater on land: hyperosmotic to their environment.

Now, either the evolutionary leap is too far to reactivate their glomeruli, or the selection pressure for fish who can swim deeper is not high enough to favor the re-evolution of the necessary adaptations. Or perhaps there has simply not been enough time for fish to evolve it. Interestingly, only two families of bony fish have ever been found below about 6,000 meters (20,000 feet): the cusk-eels and the snailfish. Strong evidence suggests some sort of dramatic drop in seawater oxygen concentrations during the Cretaceous (incredibly, there have been six of these since fish evolved 400 million years ago) resulted in a mass die-off of deep sea fish. When the Atlantic Ocean opened up 94 million years ago, it once more permitted circulation patterns that re-oxygenated deep water, but bony fish seem to have been slow to reconquer the realm.

I should also note that TMAO is not without its drawbacks. It can actually harm protein function in the absence of destabilizing forces like high pressure because it over-stabilizes proteins and prevents them from doing their jobs, so it's important for fish to be able to decrease production if they ascend in the water column. The detrimental effects of TMAO may explain why fish don't make lots of it even in shallow water. In that environment, more TMAO would theoretically help reduce the costs they pay to stay hydrated as a result of the 750 mOsmol/kg difference in the osmolarity of their bodies with respect to seawater. There must be some other price to pay that is greater than this benefit. Indeed, an alternative hypothesis for the lack of fish below 8,400 meters is that TMAO simply becomes too toxic at the concentrations needed to counteract the pressure below that depth.

These damaging effects may be responsible for the final twist in this deep sea fish tale. You may have vaguely recognized the name TMAO, which is short for trimethylamine N-oxide. It is the self-same chemical that made headlines in 2013 for being suspected of damaging the cardiovascular health of red-meat eating humans because it is produced in abundance by the intestinal bacteria of habitual carnivores. It is yet another wonder of biology (and chemistry) that the same molecule that may prematurely kill steak-lovers also allows gelatinous, ethereal fish to thrive in the deepest, darkest, most hostile corners of our planet.

How to Brew the Perfect Cup of Coffee, According to Science

Jamie Foster, Christopher H. Hendon and The Conversation US

Hundreds of Hospitals Are at Risk of Hurricane Flooding

How Much People Write Can Reveal Racial Biases

Ocean Giants: How Big Are They Really?