Blogger's Note: As I'm on vacation this week, today I present a post from the archive at theartfulamoeba.com. This post originally appeared on my blog on Feb. 14, 2010. Enjoy!

Vibrio cholerae is a bacterium of surprising adaptability, tenacity, and Olympic-class swimming ability. Cholera bacteria can swim in both freshwater and saltwater (a feat most fish cannot manage), and somehow also manage to do the backstroke through stomach acid without kicking the bucket. The historic killer has just popped up again in Papua New Guinea for the first time in 50 years, killing 40. Officials are worried that it may once again become endemic there, taking up residence in the locals' water supply.

And this is despite our knowing exactly how to prevent the disease for well over 150 years, ever since British physician John Snow famously helped halt a London cholera epidemic by persuading the authorities to abscond with the handle to the Broad Street Pump, preventing people from drawing its lethal waters. There's only so much science can do. Money and competency are also required.

Cholera is a disease you have probably at least read about if you did any of the required 19th-century high-school lit reading. That's because it was a newly famous and successful killer that century, decimating millions globally and hundreds of thousands in the United States, as the bacteria spread along coasts and up and down rivers. It was a swift death, too, and until mid-century, no one knew the cause.

A few years ago I visited some old graves out on the lonely prairie of Nebraska near the inland-sea-sized Lake McConaughy at Ash Hollow State Park. Buried there was Rachel Warren Pattison, a young woman who traveled the Oregon Trail in perfect health one day and was dead of cholera the next. Her party, including her 23-year-old husband of two months, Nathan, had only a few hours to carve a marker for her before the wagons moved on, and miraculously, in an uneven but serviceable hand on a rough stone, they did. I stared at that marker a long time. Sometimes I think modern, first-world citizens greatly take for granted the fact that most of us will not randomly keel over tomorrow from some fatal and unpreventable disease. Before the 20th century, people everywhere lived with that fear (and reality). Imagine how your life would be different if you lived with that reality now.

In any case, Rachel was but one of the 6,000-12,000 killed along the Oregon, California, and Mormon Trails between 1849, the year of the gold rush, when cholera was spread along the trail by prospectors and settlers, and 1855, when the pandemic ended. And that epidemic was just one tiny sliver of the half dozen major pandemics that covered the world that century, a product of globalization and colonialism. Before 1816, cholera seems to have been a local disease restricted to India. But with people increasingly traveling between east and west, it swiftly leached into waterways around the globe. In the UK, where the disease claimed tens of thousands of lives in the first wave in 1831-32 alone, it began to be called "King Cholera".

What made and still makes cholera such a frightening disease was the speed with which it could (and can) kill. Death can come as quickly as 3 hours after the onset of symptoms, but more commonly within 24 hours. Its most famous symptom -- thin diarrhea descriptively called "rice-water" stool -- accurately indicates the cause of death. You die from lack of fluids. That's it.

Cholera bacteria use their tails (flagella) to propel themselves into the walls of your intestinal cells, where they secrete a toxin that causes cells to expel chloride ions. This, in turn, creates ionic pressure that keeps sodium from entering cells. That causes osmotic pressure to build on the outside of the cell, drawing massive amounts of fluid into the intestine. Building reliable sewage and water treatment plants prevents deaths, as does simply keeping cholera victims hydrated with a simple electrolyte solution. That we can't manage even that that in many parts of the world is as discouraging as it is laughable.

Ancestors in the Deep

But here's the really interesting thing about cholera, at least from my perspective: scientists are discovering that cholera seems to be an inherently aquatic and previously deep-sea bacterium that evolved to peacefully colonize copepod shells and mollusc interiors, and only accidentally turned out to be good at violently colonizing human small intestines. Wow!

In 1999, the submersibles Alvin and Nautile visited hydrothermal vents at the East Pacific Rise and sampled sulfide chimneys there. Vibrio species were identified there with "significant similarity" to V. cholerae, according to past NSF-director Rita Colwell, who has studied cholera since the beginning of her career.

Modern V. cholerae colonize the outside of copepod shells (Remember copepods from here and here?) and the insides of shellfish and must compete for space there in the life-sustaining biofilm. It turns out that those that are best at attaching to copoped shells also happen to be most pathogenic in humans. And a mucinase (enzyme that breaks down intestinal mucus) that helps them attach your intestines is greatly aided in its work by the addition of an extract made from mussels. That is, eating shellfish contaminated with cholera make make matters way worse than simply drinking the bacteria. 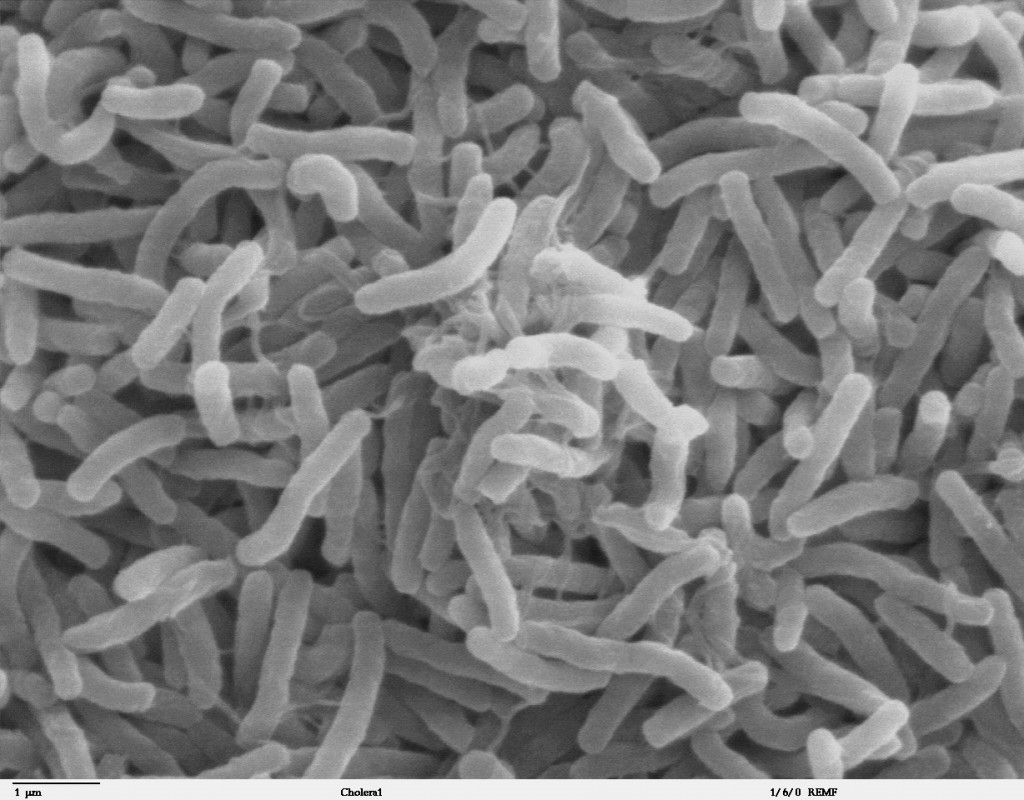 Cholera is probably not an eradicable disease, according to Colwell, since we seem to be only accidental victims, while copepods and cholera are the real story. Since they're ubiquitious and may be providing some important ecological function, we must instead rely on ingenuity and engineering to keep us safe. Basic sewage and clean water systems for all people of Earth does not seem like an unreasonable demand.

Two interesting human genetic notes regarding cholera: you may already know that Sickle Cell Anemia is widely considered to be a by-product of the genetic advantage that having one copy of the harmful gene provides during malaria infection. With one copy, you get malaria protection; with two copies, you get sickle cell anemia. Some have speculated that cystic fibrosis is a two-copy gene problem produced by a single copy that confers resistance to cholera. As well, blood types seem to confer various protections (though not immunities) from cholera: AB blood is most resistant, followed by A, then B, then O.

Vibrio is in the gamma-proteobacteria, a group you can find on the tree of life here (click on Proteobacteria to drill it down a bit). Gamma-proteobacteria contain many human pathogens, including Yersinia pestis (the cause of plague), Salmonella, Escherichia coli, and Pseudomonas aeruginosa, a cause of lung infections in (ironically) cystic fibrosis patients and other ill people.

But don't get the idea that gamma-proteobacteria are mostly human pathogens. My gut(!) tells me they're probably the exception, rather than the rule. We just happen to know more about them because there's money to study human pathogens. The rest of the (probably amazingly interesting) group languish in obscurity. Don't believe me? Look at all the families here.

Footprint Discovery Hints at Humans in the Americas More Than 20,000 Years Ago

Planthoppers of Iran: Are You OK?