Author's Note: I am curious about you and am starting a survey of my readers today in partnership with scientist Paige Brown Jarreau. Please see the end of this post for details!

In the winter of 1916-17, Alfred Wegener was serving in the German army's weather service. Sometime that winter, perhaps in the course of his duties, he noticed something strange sprouting from the fallen logs and branches of France's Vosges Mountains, near the border with Germany. It appeared to be luxuriant, silky hair made of ice.

Wegener's name may ring a bell. He would go on to fame for something much more, well, Earth-moving than tree hair: continental drift. He was among the first and earliest vocal proponents of the idea.

However, he vastly overestimated the speed at which continents wandered, which did not help his case; he lacked a mechanism by which entire continents might plow through ocean beds; and (worst of all from the perspective of geologists) he was a meteorologist. Surely he could have nothing intelligent to say about terra firma – especially something that upended hundreds of years of geologic orthodoxy.

In 1912 he published “The Origin of Continents and Oceans”, but for years after his ideas were ridiculed and dismissed by the greater geologic community. It was not until the 1940s that English geologist Arthur Holmes published a plausible mechanism for drift, and not until the 1960s before the smoking gun of the matching magnetic tape recorders on either side of the Mid-Atlantic Ridge were discovered and continental drift – soon rechristened plate tectonics -- was nearly universally acknowledged as the chief driver of geology on our world. By that time, Wegener was long dead; he had perished on Greenland while resupplying a research station in 1930.

In the meantime, his work on the important topic of hair ice, understandably, remained beneath the radar.

But scientists have not forsaken it, and a team from Germany and Switzerland recently made a discovery -- published in July in the journal Biogeosciences -- that not only confirmed an idea Wegener had about the cause, but also ID'd the stylist that gives hornbeam and elderberry salon-worthy hair.

Hair ice is made of ultra-fine filaments just .02mm wide but up to 20 cm long. It's found on barkless dead wood or on wood where the bark has begun to peel away. It's usually found on moist, rotting logs and branches lying on the ground, but sometimes found on dead parts of still-standing trees. The hair is smooth and lustrous, and may have waves, curls, or even parts, just like human hair.

"IJshaar, in Austerlitz, Utrecht (Netherlands)" by Ronaldhuizer - Own work. Licensed under CC BY 3.0 via Commons.

Only a narrow range of conditions permit hair ice formation. If the air is too dry, hair ice will sublimate, so the air must be humid. Calm conditions help too. Further, the temperature must be below 0°C (32°F) -- but only slightly below. Finally, hair ice occurs predominantly between 45°N and 55°N, a band that encompasses the northern United States, Canada, Russia, and northern Europe.

Hair ice has some other peculiarities. Once a piece of wood acquires the ability to grow hair ice, the wood retains this ability and can regrow its hair many times. The hair also sprouts from a particular part of wood called the “rays”. These are wood cells that grow from the center of the tree out toward the bark, giving a ray-like appearance when the tree is cut cross-wise.

In a living tree, these cells are viaducts that transfer food and water from the inside to the outside of the trunk and vice versa, but also store starch, protein, and fatty substances called lipids. Ray cells can also make special substances like resin. In this photo, you can see the annual growth rings (larger vessels are made in spring and summer and smaller ones in winter) parted by radially-directed ray cells. 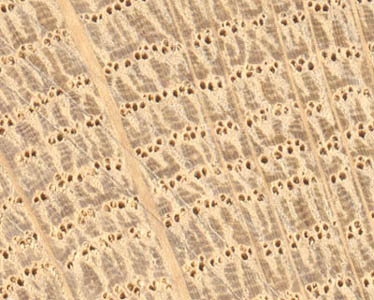 Significantly, the thickness of ice hairs is identical to the diameter of the wood's ray cells on the particular species of tree on which they are found.

Scientists also suspected that a phenomenon called “ice segregation” plays a part in making hair ice. Ice, water, and a porous substance like soil or wood must all be present for this process to occur. The soil or wood must be also be soaked with water. Once an ice crystal forms, its growth is fueled by the movement of water through capillary action toward the freezing along the pore surfaces of the wood or soil. As long as there is "liquid water fuel" in the substrate and it can move by capillary action, the ice will continue growing. Gradually, the wood or soil dries as it is drained of liquid water and when it is gone, freezing will cease.

Ice segregation explains how hair ice forms in the first place. But it cannot explain the magnificent shape of the hair and its persistence for hours or days. Something else must be involved.

When Wegener first encountered hair ice, both in 1916/17 in the Vosges Mountains and in February 1918 at Rheinsberg in northern Germany, he noticed a mat of fungal filaments on the branches that with hair. He assumed that this fungus played a role in making hair ice. Over the years, other scientists have confirmed that fungi are present in hair-ice making wood, but no one tested to see whether the fungi were actually essential to hair ice production.

To investigate whether the presence of living fungus was essential to make hair ice, the German-Swiss team treated hair-ice producing wood with fungicide in 15 minute increments up to 120 minutes. Even at 15 minutes, the wood produced far less hair ice than controls, and 120 minutes halted production entirely.

Hot water treatment produced the same effect and completely suppressed subsequent hair ice growth even after only a one-minute treatment. Both fungicide-treated and heat-treated wood slowly regained the ability to produce hair ice over time – probably because the fungus recovered from its toxic exposures or some spores survived and later germinated.

Next the scientists sought to identify their fungus or fungi involved. A clear pattern emerged. Although many trees can make hair ice – 10 species from five families of broadleaf plants – only one fungus appeared in every hair ice sample: Exidiopsis effusa.

It was not visible yet when hair ice formed first in late fall. But a few weeks later, its “unspectacular fruiting body” – basically, a homely whitish film that could also be tinged blue, gray, or pink – appeared on the same areas of all samples that had produced hair ice, just as Wegener described.

Inside the wood under the fungal coating, the wood cells were stuffed with fungal filaments called hyphae. They grew along the wood vessels, but also used wood rays to access the deeper reaches of the wood.

Was the fungus doing something active to produce hair ice? When the scientists looked at heat production during freezing, they found that hardly any was produced by the fungus, indicating it likely is not metabolizing or playing any active role in making hair ice. And yet living fungus must be present for hair ice to form. What could explain this conundrum?

Ice has a peculiar tendency to something called “recrystallization”. In this process, fueled by surface tension of water molecules as they briefly melt and refreeze, small ice crystals are quickly dissolved and incorporated into larger ice crystals, thus fostering the growth of large crystals at the expense of small ones.

In nature, organisms like fish, insects, plants, fungi, and bacteria that live in polar climes often possess proteins called “recrystallization inhibitors” -- also sometimes called “biological antifreeze” -- which prevents small crystals of ice from growing into larger ones via this process. Inside cells, large crystals are bad because when they get large enough, they can puncture cell membranes or shred whole tissues. In humans, frostbite is the nasty result.

Because fine filaments of hair ice can maintain their delicate shape for days, this strongly suggests to the authors of the Biogeosciences paper that hair ice is “doped” with some sort of recrystallization inhibitor. Bolstering this idea is the fact that water from melted hair ice is tinged brown, they said, suggesting some sort of organic substance suspended within it.

When hair ice was melted and its chemical makeup studied via mass spectrometry, scientists found that the organic substances within were lignins and tannins, two major components of wood. Lignins are like wood re-bar – they stabilize cell wall against being squished. Lignin is also one of the most rugged biochemicals out there and is virtually indigestible by living organisms. No animals can digest it, and only a few fungi and bacteria have managed to find a way. Tannins turn forest lakes and tea brown, deter herbivores and parasites, and give red wine that puckery sensation (last year, I wrote about the discovery the plant cellular organ that makes tannins here).

What seems to be pertinent about lignin and tannin is that they are large, irregular molecules that may act as ice crystal seeding agents – or as recrystallization inhibitors. A potential clue: one form of lignin slows the hardening of cement. Or perhaps the presence of lignin and tannin is a red herring, and the recrystallization inhibitor may be some other organic chemical produced by Exidiopsis effusa. Whatever it is, it may also be found in fine ephemeral hairs that appear inside hair ice as it is melting.

The fungus's role, it seems, is not in “making” hair ice, but in passively sculpting it through the combination of its presence in nozzle-like ray cells pointing outward, laced with fungus-made recrystallizatization inhibitor. The ray cells generate the initial shape passively through their diameter and ice segregation, and the recrystallization inhibitor present in the water and embedded in the ice during freezing passively prevents the shape of the fine hairs from morphing into larger crystals once sprouted. But this, apparently, can be done only by a substance the fungus makes when alive.

Something the fungus is producing must function as a recrystallization inhibitor in order for those long, beautiful hairs – with a crazy length to diameter ratio of 10,000:1 -- to persist for hours or days near the freezing point where momentary melting and resculpting of ice is likely. For when the scientists soaked hair-ice making wood with poison or hot water, the branches that lost their magical mane-making abilities sported nothing more than a boring icy crust.

Special Note: I am curious about you, my readers! I’ve teamed up with researcher Paige Brown Jarreau -- author of the blog From the Lab Bench -- to create a survey of my readers. By participating, you’ll be helping me improve The Artful Amoeba and contribute to SCIENCE on blog readership. You will also get FREE science art from Paige's Photography for participating, as well as a chance to win a $50.00 Amazon gift card (100 available, or guaranteed 2 per specific blog included in this survey) or a T-shirt. It should only take 10-15 minutes to complete. You can find the survey here: http://bit.ly/mysciblogreaders.

How Scientists Revived Dead Pigs' Organs, and What the Feat Means for Transplants

Last Month Was among the Hottest Julys Ever Recorded

Restrictions on Psilocybin 'Magic Mushrooms' Are Easing as Research Ramps Up

Under an Eclipse, a Lawn Full of Crawling Stars