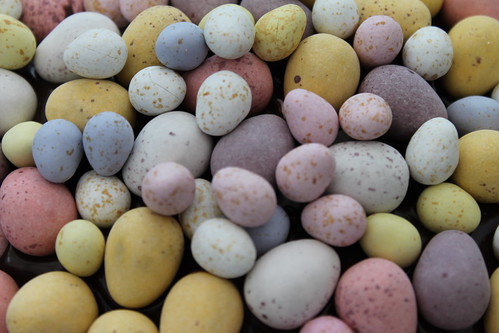 Photo by Willow Gardeners. CC, click on image for license and information.

Eggs occupy a special status during Easter observances. They're symbols of rebirth and renewal—life bursts forth from this otherwise plain, inanimate object that gives no hint as to what it contains. In this regard it is a handy symbol for the resurrection of Jesus Christ, but it is is a symbol that has held this meaning long before Christianity adopted it.

Ishtar depicted on a vase in the Louvre. Public domain.

There is a meme floating around Facebook that some people have rallied around and are sharing as a "truth" of Easter. It proclaims:

Easter was originally the celebration of Ishtar, the Assyrian and Babylonian goddess of fertility and sex. Her symbols (like the egg and bunny) were and still are fertility and sex symbols (or did you actually think eggs and bunnies had anything to do with the resurrection?) After Constantine decided to Christianize the Empire, Easter was changed to represent Jesus. But at its roots, Easter (which is how you pronounce Ishtar) is all about celebrating fertility and sex.

Clearly, we all know that Facebook memes are the ultimate source of information—particularly when they makes a biting point about something or some group that is not particularly favorably viewed. But it is well known that under the Roman Empire, Christianity did indeed adopt the pagan rituals of conquered peoples in an effort to help convert them. It worked pretty well as a strategy as it allowed the conquered peoples to continue a semblance of their observances as they remembered, and with time the population would be replaced with those who only knew the new traditions. This is not a secret. However, there are a few things wrong with the Ishtar meme that a simple Google search will turn up:

Our helpful meme places the egg in Ishtar's domain, but Ishtar doesn't seem to be connected to eggs in any explicit way. However, there are plenty of other older traditions that involve the egg as a symbol of rebirth and feature it prominently in creation mythologies:

The Sun is Brahma—this is the teaching. A further explanation thereof (is as follows). In the beginning this world was merely non-being. It was existent. It developed. It turned into an egg. It lay for the period of a year. It was split asunder. One of the two egg-shell parts became silver, one gold. That which was of silver is this earth. That which was of gold is the sky … Now what was born therefrom is yonder sun (1).

The Sun God, Ra with an egg-shaped disk over his head. Public domain.

These are some of the stories that build the foundation for the tradition of eggs at Easter. Contrary to the assertion of our meme, eggs and bunnies actually do have something to do with the idea of resurrection: in these early stories, the creator often emerged from the egg itself in some form:

The cosmic egg, according to the Vedic writings, has a spirit living within it which will be born, die, and be born yet again. Certain versions of the complicated Hindu mythology describe Prajapati as forming the egg and then appearing out of it himself. Brahma does likewise, and we find parallels in the ancient legends of Thoth and Ra. Egyptian pictures of Osiris, the resurrected corn god, show him returning to life once again rising up from the shell of a broken egg. The ancient legend of the Phoenix is similar. This beautiful mythical bird was said to live for hundreds of years. When its full span of life was completed it died in flames, rising again in a new form from the egg it had laid (4).

The Phoenix was adopted as a Christian symbol in the first century AD. It appears on funeral stones in early Christian art, churches, religious paintings, and stonework. The egg from which it rose has become our Easter egg. As with many symbols, the Easter egg has continued to shift. When the Lenten fast was adopted in the third and fourth centuries, observant Christians abstained from dairy products, including milk, cheese, butter, and eggs. In England, on the Saturday before Lent, it was common practice for children to go from door to door to beg for eggs—a last treat before the fast began.

Even the act of coloring eggs is tied to the idea of rebirth and resurrection. While egg decorating kits offer a vibrant means of decorating eggs today, the link between life and eggs was traditionally made by using a red coloring. Among Christians, red symbolizes the blood of Jesus. Among Macedonians, it has been a tradition to bring a red egg to Church and eat it when the priest proclaims "Christ is risen" at the Easter vigil and the Lenten fast is officially broken (5).

I love the Easter traditions at Church. The lighting of the Easter candle reminds me of my childhood Diwali celebrations and the lighting of Christmas lights as they all represent means of driving away darkness. Ishtar may well have some connection to the rites of Spring, and admittedly Easter itself is an observance of Spring, but in an age when so much wrong has been done in the name of religion, and religion is a focal point for criticism and debate, it's worth remembering that the overlap of time and history has given us richer traditions than any of us can truly be aware of—and that memes shouldn't be taken at face value.

Have something to say? Comments have been disabled on Anthropology in Practice, but you can always join the community on Facebook.

The Obligation of Gifts

Ashes, Yarmulkes and the Hijab: Communitas and Religious Symbols

What are the costs of lending a helping hand?

What is Christmas Spirit?

On My Shelf: Blue Jeans-The Art of the Ordinary

Just the Essentials: A Look at the Things We Carry