The Natural History Museum of Los Angeles County is my favorite place to go for science art inspiration. Lately I’ve been going to their Citizen Science + Cocktails events which feature talks by scientists that relate to the Museum’s many citizen science projects, such as SLIME—Snails (and Slugs) Living in Metropolitan Environments.

Malacologist* Jann Vendetti talked about her research on Southern California native snails as well as troublesome invasive species. I learned a lot and happily immersed myself in 45 minutes of information about these wonderful invertebrates.

*Malacology is the study of molluscs, an animal phylum that includes octopus, squid, snails, slugs, clams, and other organisms with calcium carbonate shells and soft bodies.

I learned a lot, but one fact had me just wildly amused. 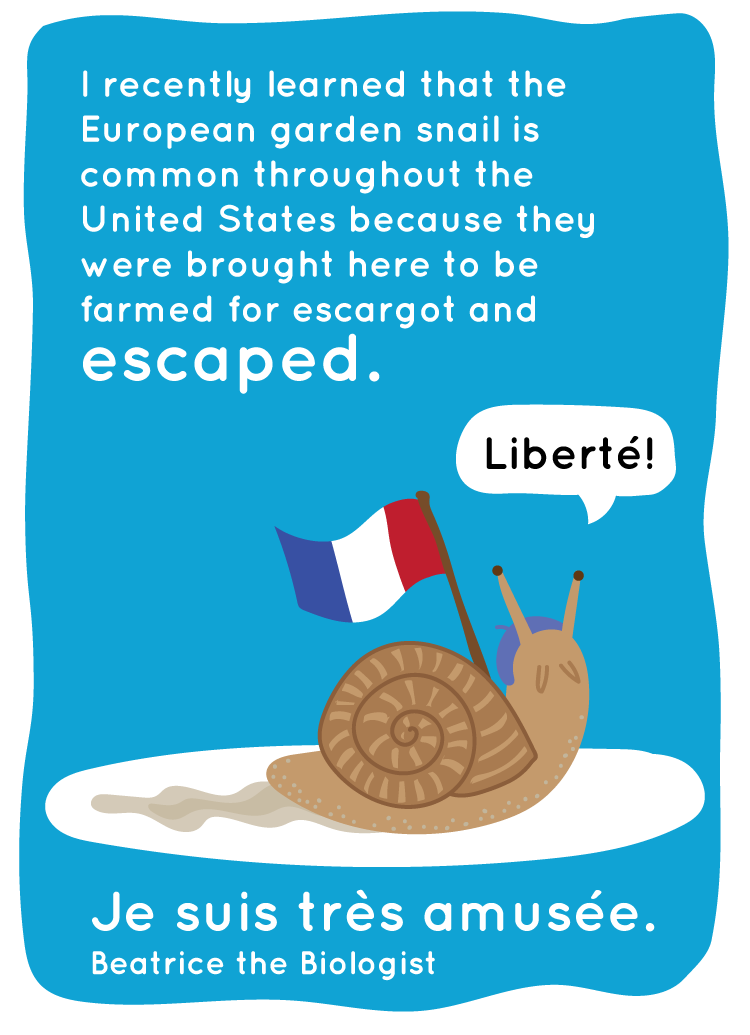 Yes, I couldn’t resist. I even asked how on Earth our Mediterranean snail guests could have escaped in such numbers as to colonize so much of the area. Indeed, it has happened multiple times all around the country. These snails escape, probably as wee snail babies, and reproduce happily. And since snails are hermaphrodites, they are quite prolific multipliers. A pair of snails can fertilize each other, and both snails go off and lay snail eggs. Well played, snails.

While these European tourist snails aren’t that bad as far as invasive species go—they’re not carnivorous like some other invasive snails are—they are still crowding out their native snail cousins.

If you want to be a part of citizen science, check out iNaturalist.org. There are projects from all over the world where you can upload photos of organisms and add to a giant database of nature sightings. And if you live in the Southern Californai area, you can participate in SLIME and upload pictures of snails!

Will Quantum Computing Ever Live Up to Its Hype?

What's Causing Michigan's COVID Surge, and Who's Getting Sick?

Beehives Are Held Together by Their Mutual Gut Microbes