Seattle's not only a lovely city, it's got gorgeous parks and some bonza geology tucked away just about everywhere. Reader Galway asked for interesting places to take kids around here, so this summer, I'll be writing up some of my favorite places for you. Today, we're going to visit Seward Park, which has got some of Seattle's only bedrock exposures, some bonza glacial erratics, and a genuine earthquake scarp. There's a lot of non-geology science there, too, so you should be able to find something to please everyone.

Seward Park occupies Bailey Peninsula, which juts out into Lake Washington like a crooked finger. It is (drumroll please) a drumlin. You're standing on a hill that didn't exist until the great continental ice sheets came down, covered Seattle in 3,000 feet of ice, and left their mark all over the place. As the ice retreated, it left behind the teardrop-shaped hills of glacial debris that makes Seattle the Rome of North America, or so we like to pretend. Alas, the Seward Park drumlin isn't considered one of those semi-classical hills, but it is still awesome, as you can see in this helpful LIDAR image.

It's known as the Bailey Peninsula. I'd like to rename it the Bailey Cornucopia of Geological Awesomeness, so if someone could start that petition, that would be great.

Since it's a peninsula, you know it's surrounded by water. Let's discuss that water for a bit. Lake Washington was carved out by the same hawt - or is that cool? - ice sheet action that rearranged so much Puget Sound topography and left our lovely peninsula behind. Believe it or not, while it's huge, it's not super-deep - only about 200 feet at its maximum.  What it's not got in depth it makes up for in breadth - and its lovely shallows along the shore where you can see huge freshwater snail shells gathered up in tiny, quiet coves: 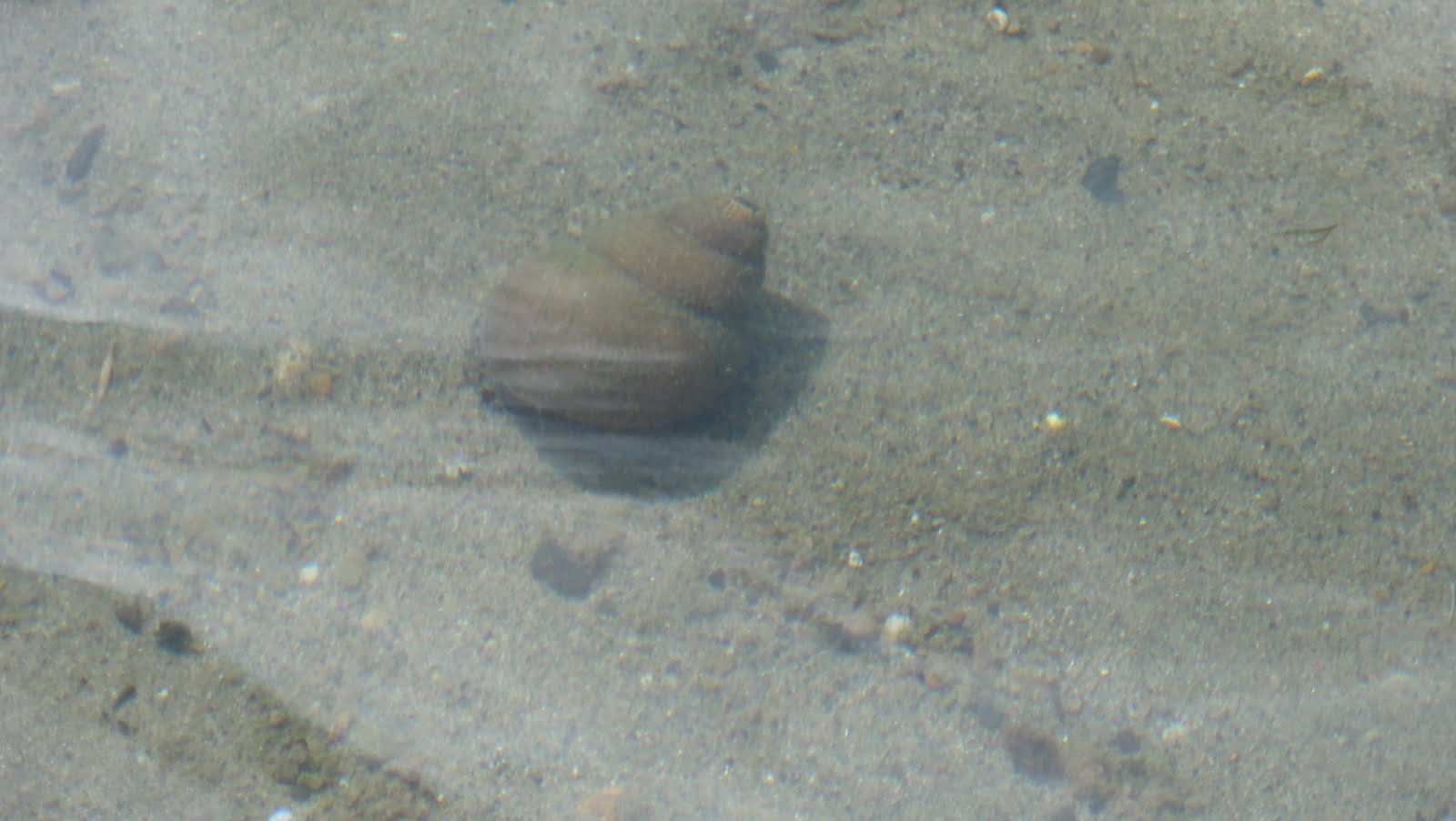 Freshwater snail shells rest on the sandy bottom of a tiny cove in Andrews Bay, just off the main trail at Seward Park.

The quieter areas of Lake Washington grow a copious amount of Nymphaea odorata, the fragrant water lily, which is incredibly beautiful but decidedly non-native. If you're fortunate, you'll be visiting whilst these are in bloom.

While the zoologists and botanists in your party are busy screaming with joy over the snails and flowers, address yourself to the short cliff along the main trail here beside Andrews Bay. It's possibly a fault scarp, and it is all awesome, because you can find chunks of our native bedrock in it. Seattle's covered under so much glacial muck that it's nearly impossible to get a glimpse of the rock beneath, but here at Seward Park, so many earthquakes have raised the land that the bedrock is exposed. Neato! 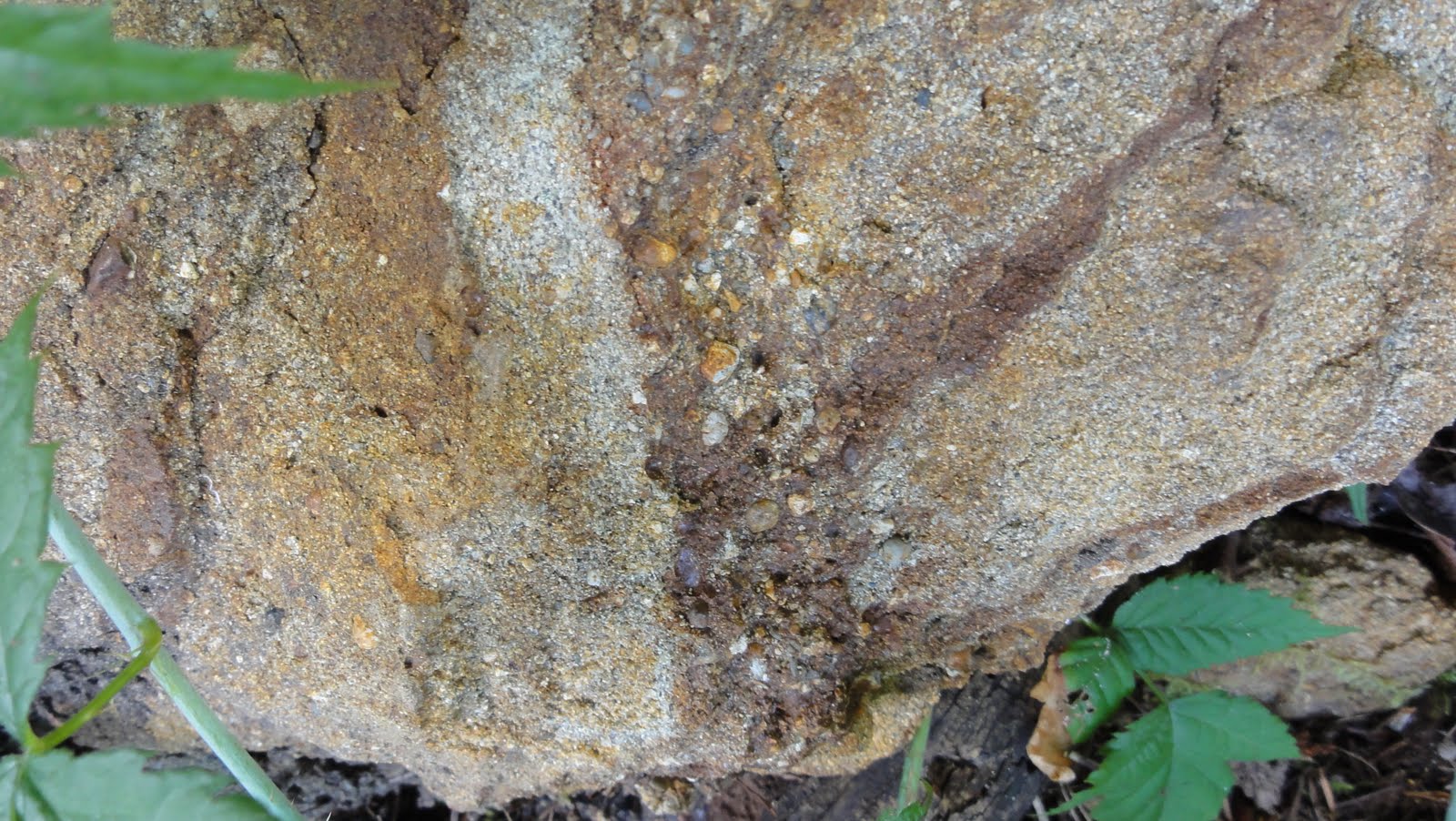 A lovely bit of the coarse Blakeley Formation sandstone.

This is a chunk of very coarse sandstone fallen from the possible fault scarp. The bits you see here are rocks of the Blakeley Formation, about 26-37 million years old, and they tell a story of the days when Seattle was under the sea.  The early Cascade volcanoes erupted and eroded, streams dumped the results all over the continental shelf, et voila - a few million years later, bedrock.  Volcaniclastic bedrock, in fact. Its conglomerates, sandstones and shales inform us that it's a submarine fan complex.  Its environment was a deep marginal ocean basin, like the ones we can see around southern California today.  Turbidity currents swept down the slope, powerful underwater avalanches that left graded beds of sediment in their wake, later to become the rocks beneath our feet.  Amazing, no?

If you walk round the tip of the peninsula, you'll find some outstanding exposures. I've written up the bedrock geology of Seward Park somewhat thoroughly here, so I won't repeat myself. Let's move on to the definite fault scarp, shall we? 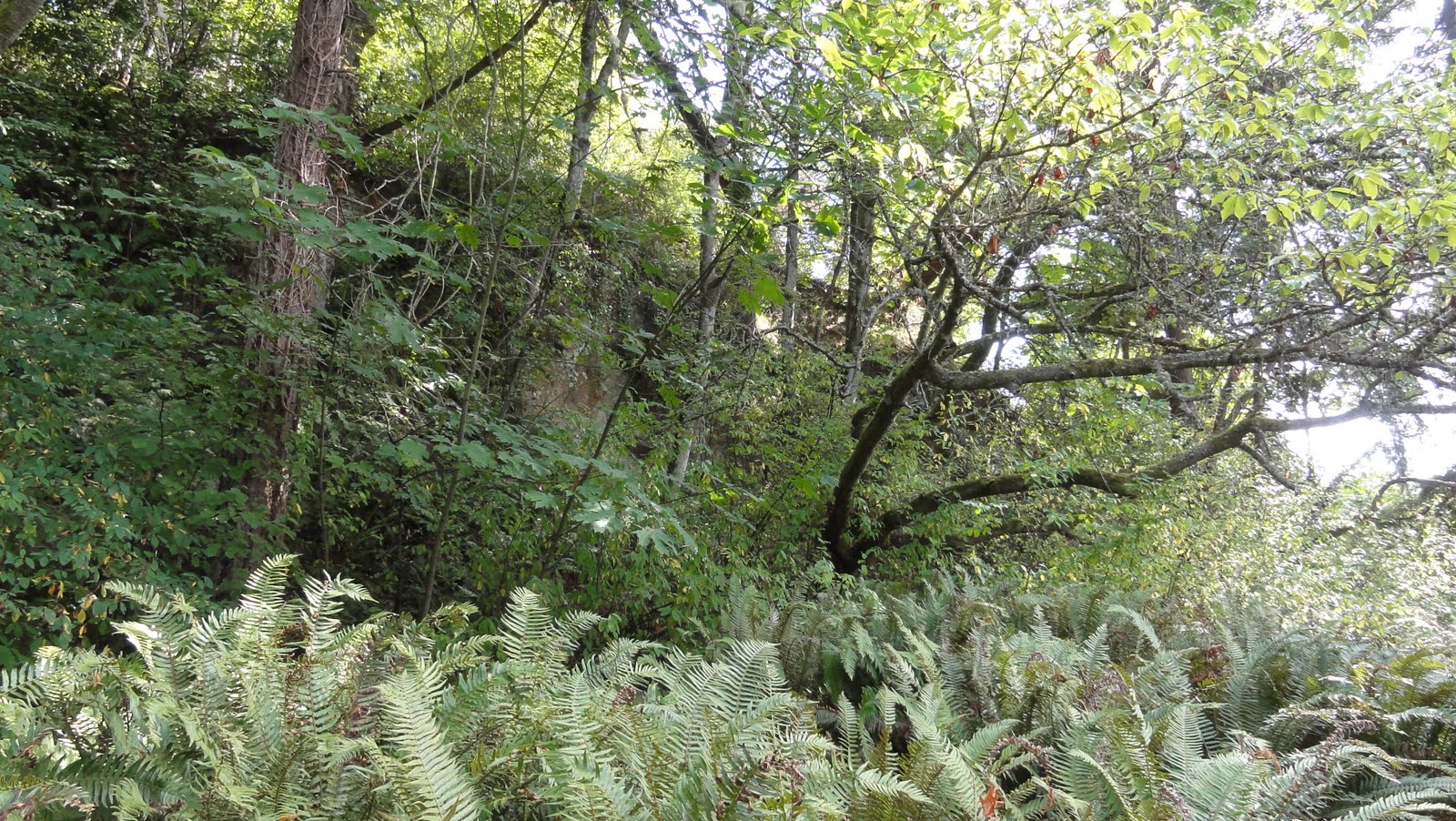 The quite awesome earthquake scarp at Seward Park. Shame about all the plants in the way...

This, actually, is what attracted me to Seward Park in the first place. They'd just finished creating a trail to the fault scarp when I discovered the place. Arizona doesn't get many earthquakes, so I hadn't had a chance to see what happens to the land when a bit of it slides down relative to another bit on a fault. The result is a wee cliff where there wasn't a cliff before. This particular one probably formed about 1,100 years ago, when an earthquake on the Seattle Fault zone raised this section of land about 20 feet. There were whole sections of forest that actually went slip-sliding off of nearby, Mercer Island, landing upright at the bottom of Lake Washington. The cold water preserved the wood well enough for it to be logged in 1916. How cool is that?

After taking your side trip along the fault scarp trail, head around to the tip of the peninsula and look north toward the I-90 bridge. On the other side of that bridge, the same bedrock exists as what you're seeing here. Thing is, it's about six miles down. That's all the work of earthquakes, which have dropped the land to the north of the fault zone in relation to the land south of it. You'd not know it if we hadn't done a lot of geological mapping and used seismic waves to determine what's under all that sediment. Everything looks pretty even - it's not like there's a six mile drop between here and north Seattle. Sediment has piled into the low spots, as sediment does.

Now we've discussed faults, let's talk about waves. We'll begin by mentioning what waves do in Lake Washington during some earthquakes. The seismic waves can cause something called a seiche. Do you want to see how seiches work? Fill a bowl with water and walk carefully with it. See how the water merrily sloshes from side to side? That's basically what a seiche is. When the big megathrust earthquake happens here, we'll probably see seiches on Lake Washington, and they could cause some pretty substantial damage to the highway bridges, not to mention the lovely homes along the shore.

But let's think of less catastrophic things. As you walk along the pebbly beach here, notice how the pebbles change size. 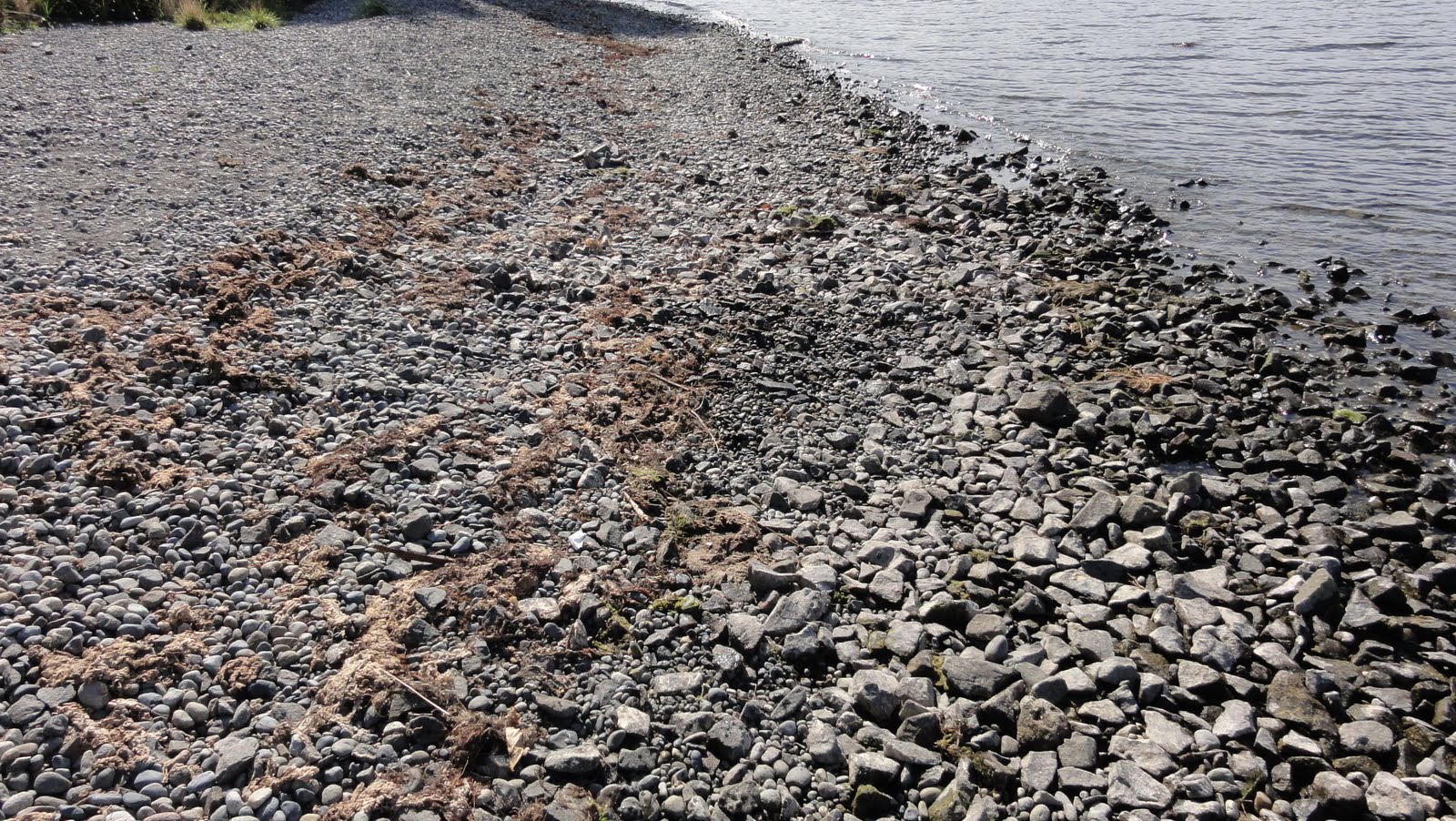 The pebbly beach at the tip of Bailey Peninsula.

The waves come wrapping round the peninsula here: you can watch them curve. From right to left, you can see how the wave energy changes. As water hits the shore and slows down, it's dumped larger cobbles and angular fragments of rock. Then there are the smaller but still large rounded bits of rock, grading into ever-smaller bits. And you can walk the beach and tell just how strong the waves are and where they begin to lose their energy: everything's sorted into great, long and very obvious strips grading from large to small, until you round the point and get to a lot of little pebbles that tell you things on this side are fairly calm. You can see that at a lot of beaches, but this is the best example I've found here in Seattle in a very short stretch of beach.

Speaking of rocks, keep your eye out for maclargehuge boulders scattered throughout the park. Many of them are obviously not the local bedrock: their rough edges have been rounded off, and they're of hardy granitic or metamorphic composition. They're glacial erratics, rafted in and dumped by the Cordilleran Ice Sheet from distant parts. Glacial Till with Glacial Erratic

This is my friend Glacial Till riding a glacial erratic, which seemed strangely appropriate to us, even though he's more into meteorites these days.

If you're there in March, don't miss the awesome skunk cabbage growing in the lower, wetter places just round the bend here. You can see it other times of the year, too, but of course it's most excellent when it's in bloom.

All of these delights are completely accessible to people of all abilities. The trail around the peninsula is paved, and the fault scarp trail is a nice gravel loop with either stairs or a ramp, depending on your needs. If you're wanting a bit of a challenge and aren't on wheels, you can choose one of the trails that goes to the top of the drumlin. Keep an eye out for piles of smooth, rounded pebbles that look like they belong in a streambed, embedded in clay, all the way at the top: this is glacial outwash.

There's a lot more science on offer here, some of which I've detailed in this post. There are flowers, and birds, and insects, and all sorts of delightful things, sure to please people of all age groups and scientific interests. Visit the Friends of Seward Park site for information on many aspects of the park, and directions for getting there. If you're taking the bus from Seattle or surrounding areas, King County Metro's Trip Planner will show you which buses will deliver you happily here. This is an excursion you can make in all seasons and virtually all weather. Enjoy immensely!

Portions of this post were originally published at En Tequila Es Verdad here, here, and here.