How much do Americans know about science? There’s a new science quiz from Pew Research Center. You can test yourself here.

It depends on what you ask, of course. Many Americans understand at least some science concepts on the quiz—most can correctly answer a question about antibiotics overuse or the definition of an “incubation period,” for example. But other concepts are more challenging; fewer Americans recognize a hypothesis or identify the main components of antacids.

We find striking differences in levels of science knowledge by education and by race and ethnicity. For example, 71 percent of adults with a postgraduate degree are classified as having high science knowledge on the scale, correctly answering at least nine of the 11 questions. This compares with about two in ten (19 percent) of those with a high school degree or less who score high. About half of whites (48 percent) score high on the scale; by comparison, much smaller shares of Hispanics (23 percent) and blacks (9 percent) correctly answer at least nine of the questions.

In this era of political polarization and sometimes intense debate over what information is true and false, Republicans and Democrats have roughly similar levels of knowledge about science. Four in ten Republicans (including independents who lean to the GOP) get at least nine of 11 questions correct, as do 41 percent of Democrats and independents who lean to the Democratic Party.

The survey questions covered a range of science topics including one on people’s understanding of when to use a control group and another about recognizing a hypothesis. Apart from the questions in the knowledge scale, the survey asked about people’s perceptions of the scientific method. When asked to choose which of two statements best describes the scientific method, 67 percent of Americans say the scientific method is designed to be iterative, producing findings that are meant to be continually tested and updated, while 15 percent say the method identifies unchanging core principles and truths, and 17 percent say they are not sure. 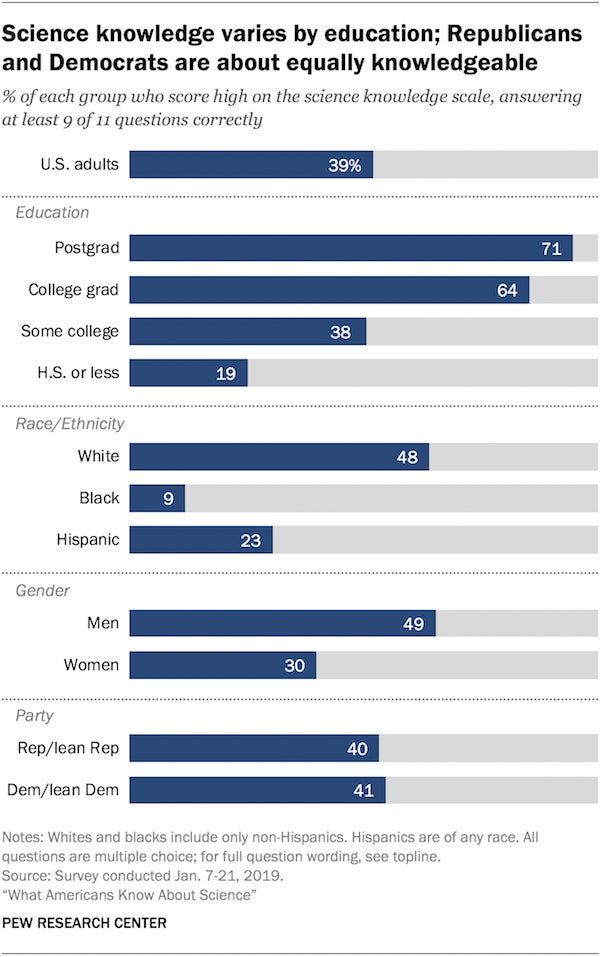 There are longstanding concerns in the scientific community about how much the public knows and understands about science. But, it’s important to point out that the role of knowledge and information in public views about science topics is complex. Past studies from the Pew Research Center, using different knowledge questions, have found high science knowledge to be correlated with support for scientific research and trust in scientists working on genetically modified (GM) food issues.

But people’s beliefs about many science-related issues are not connected with their levels of science knowledge. One example: public views about whether to mandate the measles, mumps and rubella vaccine for schoolchildren.

But Republicans with high levels of science knowledge were no more likely than those with lower levels of knowledge to think climate change was mostly due to human activity. Political orientations—whether Democrat or Republican—appeared to shape how people integrated science knowledge with their attitudes and beliefs about a range of climate and energy issues.

And as science continues to advance and new scientific debates emerge on issues such as gene editing, a more informed citizenry is seen as better able to make sense of this information and engage in civic discourse around these topics.

We Can't Solve Our Climate Problems without Removing Their Main Cause: Fossil-Fuel Emissions