When she was a ninth grader in a public high school in Beijing, says Xiwen (Julie) Hu, “a friend introduced me to the wonders of chemistry. I was inspired by the elements.” Hu was also a budding visual artist at the time, and a couple of years later, at the age of 16, she decided to combine those interests: she created what she calls a “tile” representing carbon, modeled after the standard entries in the periodic table of the elements—but with an artistic twist.

Like the old-fashioned version, it’s a square showing the chemical symbol C, the word “carbon” and the atomic number. But it’s also emblazoned with the image of a diamond (which is of course made of carbon) and also a diagram of the molecule C60, or Buckminsterfullerene, a.k.a. the “buckyball.”

Once she got started, she couldn’t stop. The result, which she finished over winter break this year as a first-year student at Bowdoin College, is a complete and idiosyncratic periodic table of the elements (the original was created 150 years ago this year). Or, as she likes to call it, the periodic graphics of the elements.

Some of the illustrations are quite straightforward: a drawing of the Golden Gate Bridge represents iron; a thermometer is the symbol for mercury; and portraits of Nobel, Fermi, Einstein and Dmitri Mendeleev (creator of the original periodic table)* for nobelium, fermium, einsteinium and mendelevium. Others are positively quirky: a cow in a bathtub of milk for calcium; the grill of a retro car for chromium; an avocado and other vegetables for potassium. 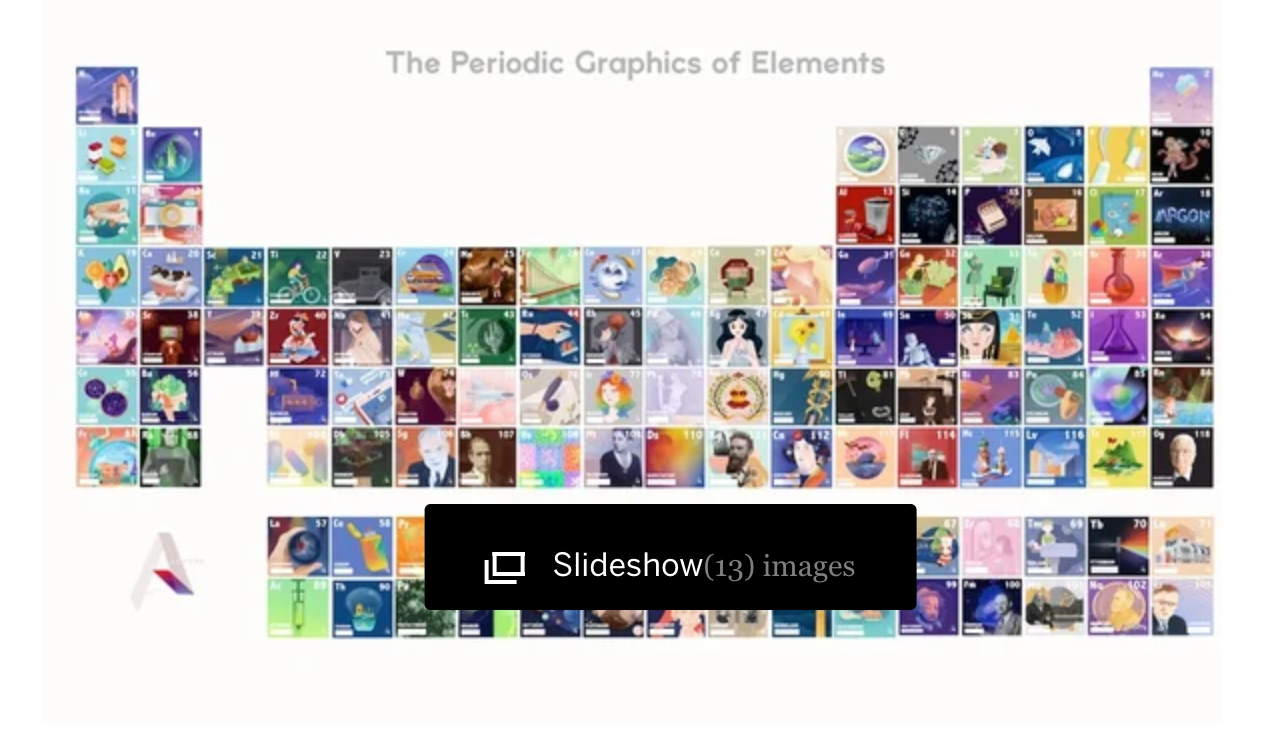 One of her personal favorites is gallium, represented by a melting spoon. The reason: gallium is a metal with a melting point of just 85.58° Fahrenheit, so if you use a gallium spoon to stir a hot drink, it disappears before your eyes. She’s also partial to francium. “It has a half-life of just 20 minutes,” she says, so part of the illustration is a clock showing “00:20”—and since it’s named in honor of France, there’s an Eiffel Tower and a chateau as well.

Now that she’s finished, Hu, who intends to major in visual art, environmental science or literature, plans to turn her graphics into notebooks or postcards. “I want to use them to promote knowledge about chemistry to a broad audience,” she says. And she’s building a website where her future projects on science visualization will live. “I want to promote knowledge of chemistry to a broader audience—like teenagers.”

Making chemistry fun seems like a pretty good way to go about it.

*The writer originally and erroneously ascribed the original periodic table to Gregor Mendel.

Michael D. Lemonick is a freelance writer; the former chief opinion editor at Scientific American; and a former senior science writer at Time magazine. His most recent book is The Perpetual Now: A story of Amnesia, Memory and Love. Lemonick also teaches science journalism at Princeton University. Follow him on Twitter @MLemonick. Credit: Nick Higgins

On December 7 the Moon Will Photobomb Mars

Is Our Universe a Hologram? Physicists Debate Famous Idea on Its 25th Anniversary

Robots Have an Increasingly Important Role in Construction

The Mind of Leonardo Da Vinci