The organisms that cause us untold suffering can also be astounding works of art, sculpted by evolution into elegant, deadly packages. Such is the case for the trypanosomes, the protists I discussed last time as the source of Chagas Disease, but which also cause sleeping sickness in Africa. But what lurks inside those little packages can be astounding as well.

Here is a scanning electron micrograph of T. brucei, the sleeping sickness agent. 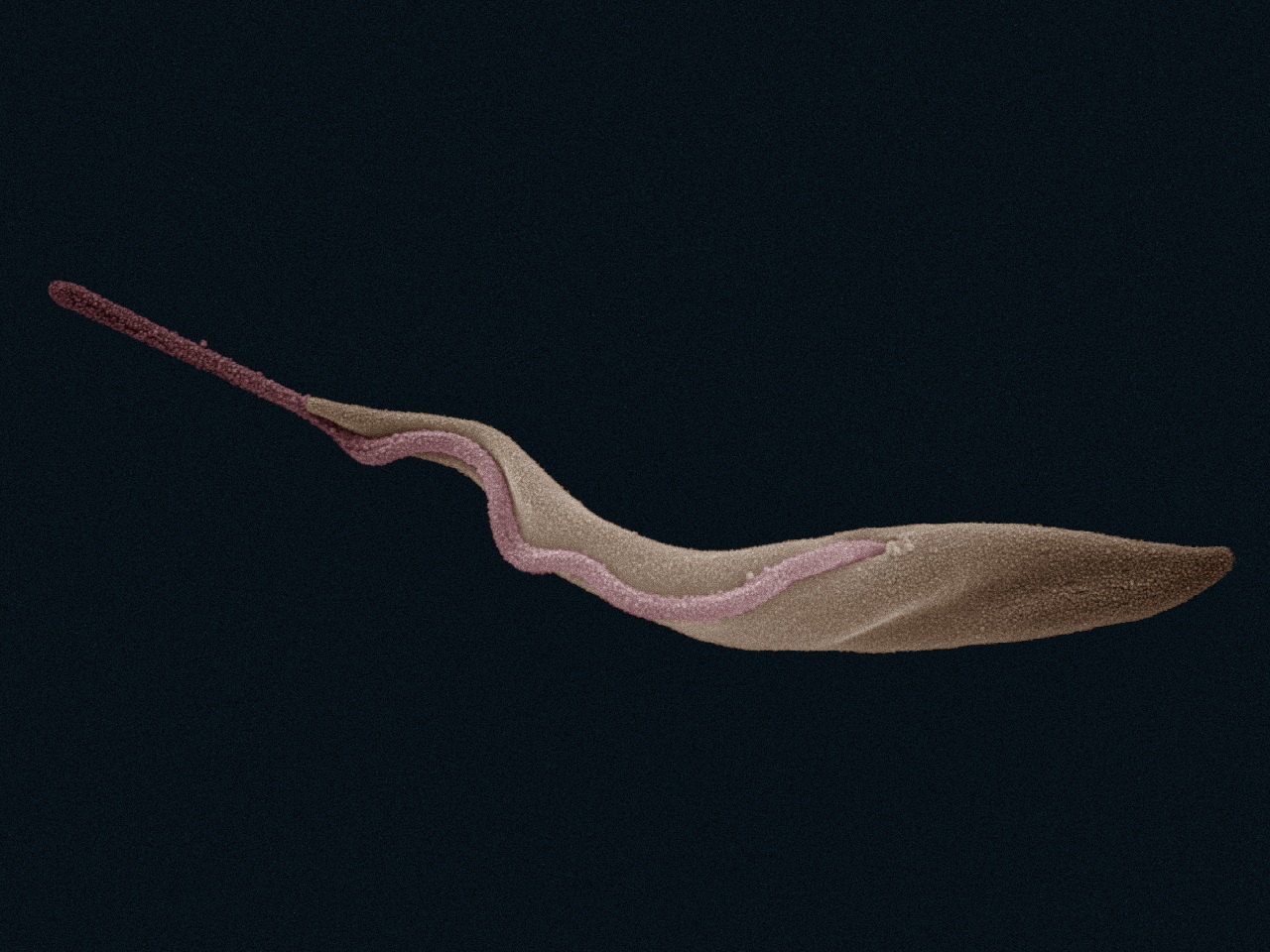 Beautiful, no? Note the side-mounted flagellum, or tail, artificially colored purple. The entire organism is about 20-50 micrometers long, about 20-50 times the size of a typical bacterium. The tail is often folded into a flap of surface membrane, and both the flagellum and the folded membrane work to push the organism through the blood it lives in. As a substance thicker than water (itself incredibly thick from a microbial perspective), blood can be difficult to ply.

Here's what the undulating membrane and tail combo look like in a trypanosome that infects pets. The pale blue blobs are blood cells.

Here you can see the waggle effect produced on the entire back end of the cell when the trypanosome's in motion. This is Trypanosoma cruzi, the agent of Chagas disease that I wrote about earlier this week. At about :12 at center right you can see one of the trypanosomes slow down and just make out its flagellum sliding over the outside of its body.

And here are the slinky, eel-like motions of T. brucei, the agent of sleeping sickness in Africa.

But what exactly is a trypanosome? It's not a bacterium or a virus or even an animal. Trypanosomes are protists, organisms that have nuclei and organelles in their cells like plants, animals, and fungi (and unlike bacteria and archaea), but are usually only one or a few cells big. Trypanosomes are a single cell and have a single tail as you can see above. In addition to Chagas disease and sleeping sickness, they are also responsible for the nasty ulcerating skin disesae leishmaniasis spread by biting sand flies.

The trypanosomes belong to a group of organisms called the kinetoplastids, which get their name from a structure at the base of their flagellum called a kinetoplast. There's nothing else like it on Earth.

In trypanosomes like T. cruzi, the kinetoplast is located in the cell's single mitochondrion at the base of the tail, likely there to provide ready energy for swimming. Mitochondria power cells, and are the descendants of bacteria that were long ago engulfed but not digested. As such, they still have their own (much-reduced) DNA, separate from the cell's own DNA stored in the nucleus.

To the best of my knowledge, the kinetoplast is Earth's only known DNA network. Most DNA on this planet is either found as long simple strands(often intricately twisted and folded, as in our cells, but still basically long strings) or as simple circles (also often stored twisted up), which is how bacteria keep their DNA. The kinetoplast, by contrast, is a giant interlocking disk made up of 5,000 minicircles of mitochondrial DNA physically linked to about three of their neighboring circles like the rings in chain mail.

You can see this in the image labelled I. below, which imagines how they would look if they were all spread flat. Embedded within this mesh are 25 larger maxicircles of DNA (not shown), themselves linked in some as-yet undetermined complex pattern. In the cell, the links in the minicircle mail are stretched out vertically into a single-layer disk, as you can see in the image labeled II. below, which shows a cross-section of the disk.

Here's a photograph of the edge of the kinetoplast showing an individual minicircle at the tip of the arrowhead. For reference, that scale bar is 500 nanometers.

The individual DNA minicircles of a kinetoplast. A clearly visible single circle is indicated by the arrow. Fig. 1A from Lukeš et al., 2002. Click image for source.

And here's what the disk looks like in cross-section in the organism itself. The arrows point to the kinetoplast in both photographs. At left is Crithidia fasiculata, which infects mosquitoes, and at right is Trypanosoma avium, which infects birds. The disk at right is very thick because the minicircles in that species are particularly long. In both cases, you can see the base of the flagellum (called the basal body) to the left of the kinetoplast. In the inset all the DNA in the cell has been fluorescently labelled. The nucleus is labelled n; the other bright spot is the DNA-stuffed kinetoplast. Note how much more brightly it shines.

Only the maxicircles contain the instructions for making the usual mitochondrial proteins, but they are encoded. The thousands of minicircles, which vary in content, are the keys/editing devices that enable the maxicircles to be properly read and converted into proteins and protein-making molecules. If you think all this is mind-bogglingly complex, now try imagining how the cell manages to get this vast interlocking network replicated and properly sorted into a new daughter cell. And yet it does happen, as anyone with Chagas or sleeping sickness can tell you.

Not every kinetoplast is as complex as the chain-mail ring network I've shown, and clear evolutionary intermediates -- like lots of unlinked rings, or rings linked to only one or two partners -- exist in related organisms. But as far as I can tell, no one yet knows for certain what the purpose of the minicircle-decoding system and chain mail network is, or what forces drove its evolution. There's lots of speculation and many ideas, however, and if you're interested in the purpose of this structure or its rather fascinating replication mechanisms (some of which are as amazing as the kinetoplast itself), I encourage you to dig into the biochemical weeds below.

Bacterial Motors Come in a Dizzying Array of Models