Growing up, I felt certain that grass and most trees did not have flowers. They just had leaves and seeds -- that was all I could see, anyway.

It wasn't until college that my eyes were opened. Not only do all trees except conifers and tree ferns have flowers, so do all grasses. All of them. You may have suspected this if you have allergies, since grass pollen is a common allergen. But where are the flowers? What do they look like?

The reason I had failed to notice grass flowers is that they look pretty much like grass seeds most of the year. The only visible indicator that they are in bloom -- extended flower parts called stamens and stigmas -- are small and fleeting, usually lasting only a few days each. You have to be vigilant to see them in action. But if those of you in the Northern Hemisphere keep a look out right now, you may catch grass flowers in bloom.

For example, a few days ago I stumbled upon this while on a walk:

Here is a closeup. The salmon orange objects are the pollen-filled stamens drooping from the dry, spikelike flowers. The cottony fuzz is cottonwood seed dander that blew onto the plant, not a part of the grass.

When the stamens are ripe, the orange anthers, or pollen sacs, will split open and the pollen will blow away in the wind. If a grain of pollen is very lucky, it will land on a stigma -- or female receptacle -- of the same grass species.

Stigmas, like stamens, need to extend from the flower. Here is an early 20th-century illustration of a grass flower showing how beautifully sculpted they can be. These look like the bushy antennae of some exotic moth, and have obviously maximized their surface area to up their chances of grabbing the right pollen:

Flowers initially evolved to attract pollinators that would improve the chances of the right pollen meeting the right stigma (wind being capricious). But since grass flowers reverted to a wind-pollinated state -- the likely ancestral state of flowering plants -- they understandably underwent some pretty radical flower evolution to readapt them to the wind-borne habit.

Grass flowers are, in fact, so specialized and different from other flowers that they have generated their own fascinating vocabulary. Where are the petals? you may wonder. Gone. Instead, there are a whole series of nested "bracts", the botanical term for plant scales evolved from leaves that surround a flower but did not evolve from true petals.

Grass bracts and other flower parts bear a host of delicious names: glume, palea, and lemma, to name a few. The long pointy extensions that makes heads of wheat prickly are called "awns". The palea and lemma enclose an individual grass flower. The glumes enclose a small collection of flowers called a spikelet. Here is how this is configured on a wheat plant (which, like all major grains, is a grass): 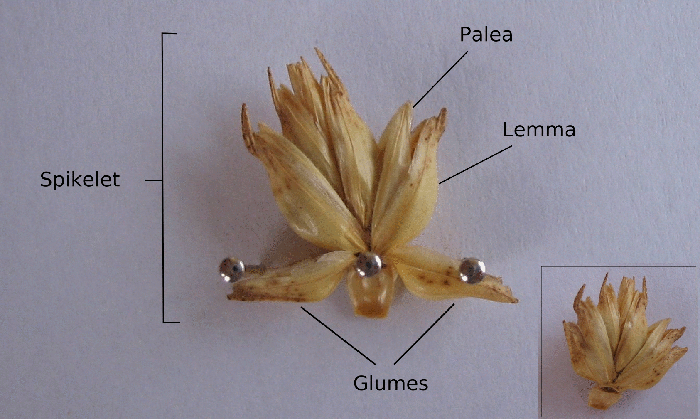 "En Anatomia" by Aelwyn - Own work. Licensed under CC BY-SA 3.0 via Wikimedia Commons.

Since grass flowers do not depend on pollinators, they don't invest much in marketing: they're drab, dry, and non-descript. This is also the situation of conifer trees (with their drab, woody cones), and so in a way you could think of grasses as the whales of the wind-pollinated plant world, and conifers the fish.

Still, ephemeral anthers may still retain the bright colors of their pollen, itself colored by the sunscreen that protects pollen grains from UV light on their extended air travels.

Here are a few more blooming grasses letting their stamens hang loose. This one is meadow foxtail (which is, in spite of its name, a grass): 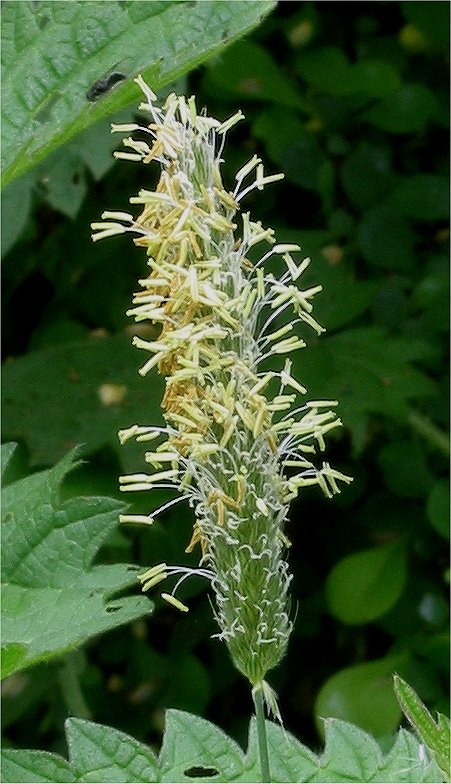 This little grass with fuzzy green and purple flowers appears to be sprouting tiny white anthers. 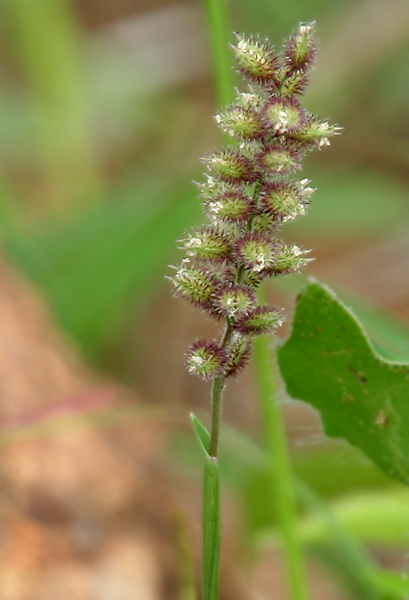 "Grassflowers" by Hardyplants at English Wikipedia - Transferred from en.wikipedia to Commons by Nomarcland using CommonsHelper.. Licensed under Public domain via Wikimedia Commons.

Natural History is Dying, and We Are All the Losers