What you are looking at may be actual blood vessels from a hadrosaur that roamed proto-Montana 80 million years ago. If the scientists who found these structures deep inside a bone are correct, in those pink tubes circulated in the blood of a living, breathing terrible lizard. That is awesome.

The scientist who started the work – Tim Cleland –  demineralized a Brachylophosaurus canadensis femur (thigh bone), first dissolving the bone and then the general connective tissue protein collagen while leaving other bio-residue intact. What was revealed was what you see above.

Then he tested the putative vessels he found in two ways. First, he used mass spectrometry to check whether the sequences of amino acids – the building blocks of proteins -- in any proteins found there were typical of blood vessels. He found amino acid sequences corresponding to the proteins myosin, tropomyosin, actin, and alpha and beta tubulins, all abundant blood vessel tissue components. The protein fragment sequences from these proteins most closely resembled dinosaurs’ known relatives, rather than contaminating microbes or more distantly related vertebrates.

Second, he added antibodies engineered to bind to four blood vessel proteins to his sample see if they would stick to the structures he’d dissolved out of the bone. They did. The binding patterns were specific and matched modern bird controls (birds being dinosaurs’ closest living relatives). 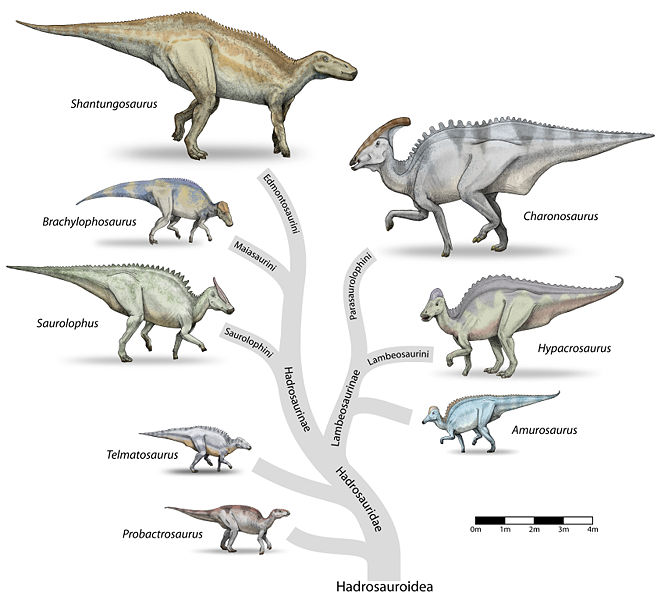 "Hadrosaur-tree-v4" by Debivort at the English language Wikipedia. Licensed under CC BY-SA 3.0 via Wikimedia Commons. Brachylophosaurus is on the upper left of this tree.

Previous discoveries of protein fragments, soft tissue, and cells in Tyrannosaurus rex and hadrosaur bones have been met with considerable skepticism. Personally, I have no trouble believing that the survival of such structures and proteins deep within bone is possible.

Whether or not you buy this team’s evidence, it is a tantalizing possibility, and it is fun to look at the photograph at the top of this page and think, and imagine.

Pompeii's Ruins to Be Reconstructed by Robot

The Sex Life of Christmas Trees