People who lack the gardening bug often regard flowers like fashion models: pretty but boring. Jens Petersen, the man who gave us the groundbreaking photographs of fungi in "The Kingdom of Fungi", which I reviewed here in March, has a new book of photographs (still available only in Danish, unfortunately, and called Blomsterliv -- "Flower Life") that shows why this is attitude is misguided.

Here's a short film he made with images from the book; it has sound worth listening to if possible, so sit back and enjoy.

What you've primarily seen are the .... how to put this? .... Mr. and Mrs. Happy parts of flowers. Yes, when you bend over to sniff a flower, you are shoving your nose into the flower's genitalia. For plants, Mr. Happy is the stamen -- comprised of a long filament surmounted by a sac called the anther that splits open to reveal ripe grains of pollen like the seeds in a freshly split pomegranate. You saw these several times in the film, and there they are on the right, below.

Mrs. Happy is the style, stigma, and ovary, collectively forming the pistil, the column in the center of the flower that may split into many sticky tips or hairs to which grab pollen grains from the wind or passing insects. Oddly, it is the female, not male, part of the flower that can end up looking like human male genitalia. Just rewatch the pan at that starts at 2:25 to see what I mean. Notice the texture of the cells at the base of the style and top of the ovary -- they appear curiously swollen.

What especially struck me about these images were the fine close-ups of pollen. You may think of pollen as a powdery annoyance that stokes your allergies and stains your clothes. But up close, you can see pollen grains for the beautifully colored and ornamented pearls that they are. They usually have a tough, water-resistant outer coat made of an enigmatic material called sporopollenin. This substance is often sculpted into elaborate ridges, spikes or other shapes on the outside of pollen that make it very easy to tell what plant they came from (the spiky balls below are characteristic of the sunflower family, for instance). 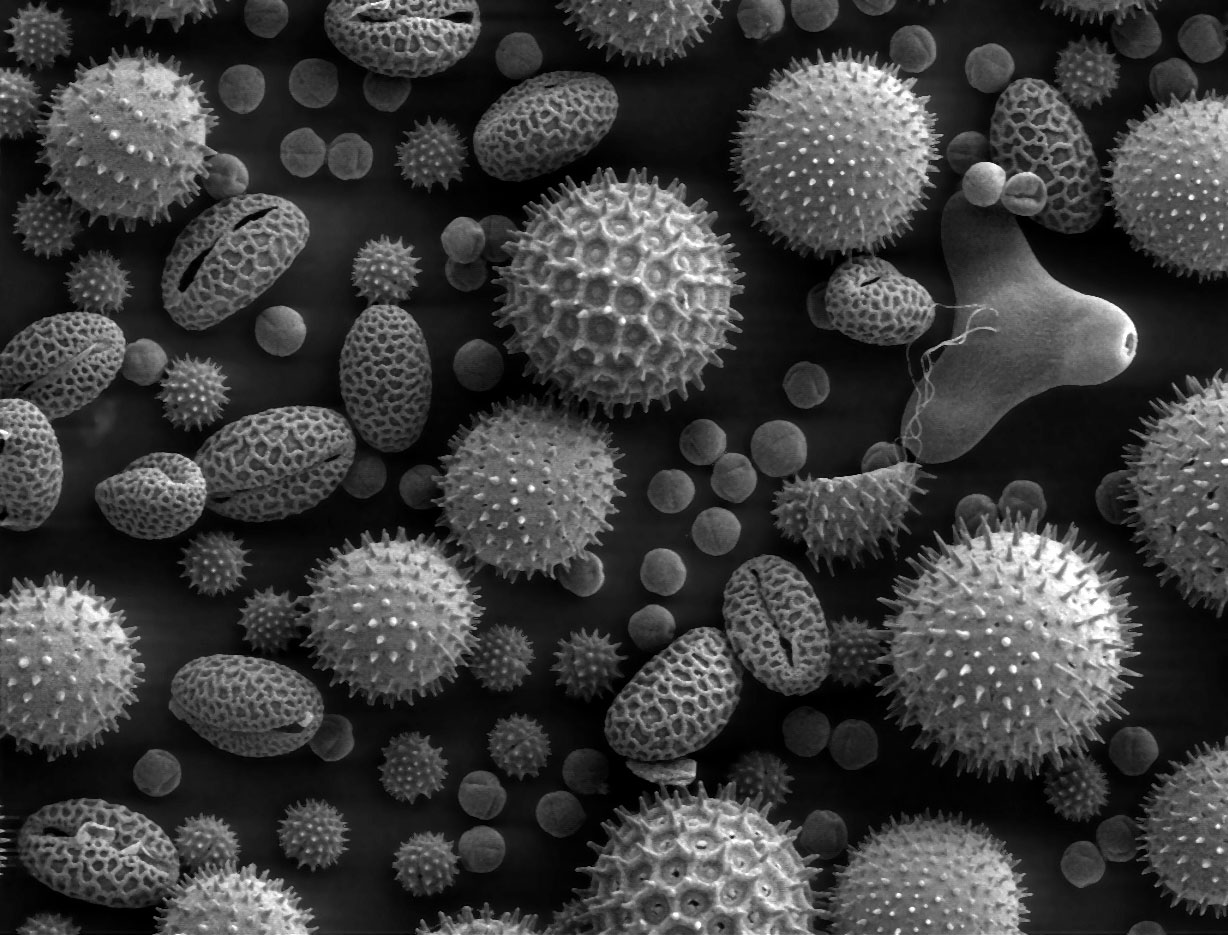 Believe it or not, this remarkable substance is the most decay-, dessication- and chemical-resistant biopolymer known, and it is used by everything from the zygote covers of green algae to the spore coatings of mosses to the pollen coatings of flowering plants. Since pollen may have to travel long and far to find a suitable mate, this coating is essential for making sure the contents -- precisely two tailless plant sperm cells or the cell that will soon divide to form them, and one other cell that will make the germ tube that will deliver these sperm to the eggs of the flower -- arrive still capable of performing their conjugal duties.

Due to its incredible resistance to degredation by the kinds of chemicals scientists use to break things down into pieces they can study, we *still* don''t know the exact composition of sporopollenin, although it's believed to be an amalgam of various chains of biochemicals like fatty acids and phenolics all crosslinked together into one impenetrable mass. The toughness of this substance is the reason spores and pollen survive so well in the fossil record and what has enabled scientists to infer incredible details such as that the asteroid that wiped out the dinosaurs landed in June or July, 66 million B.C., just as the water lilies were blooming.

Given the aforementioned impenetrable nature of sporopollenin, it makes sense for plants to provide the sperm cells locked in their pollen a means of escape from biochemical prison. You may also have noticed some of the pollen grains in this film have noticeable furrows or pores (at :33 and 1:57, for instance). It is through these weaknesses in the wall that the pollen tube will force its way out on the lucky day it lands and germinates on the stigma of just the right species.

See Jupiter Shine During its Closest Approach to Earth Since 1963

How Squishy Math Is Revealing Doughnuts in the Brain

Deepsea Challenge Hits Theaters; Here’s the Biology Behind the Film